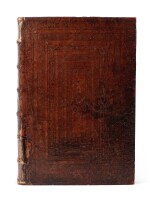 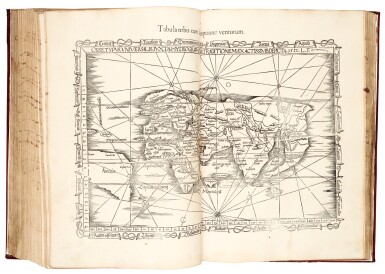 Folio (422 x 275mm.), woodcut printer's device on title-page, woodcut initials and illustrations, 50 woodcut maps (49 double-page, of which 12 of Europe, 4 of Africa, 12 of Asia, world map, map of the New World, and a further 21 maps, one with a single-page map on verso), all maps on guards of reused medieval manuscript, near-contemporary Spanish plateresque calf, lacking a2-5 (containing start of book I), n4 and [2]h6 (both containing colophon only), first few leaves repaired at edges, slight stain at fore-edge in first half of volume, final leaf stained, a few small wormholes, binding repaired (in 1993) with new endpapers

A reprint of the first Servetus edition of 1535, using the translation of Wilibald Pirckheimer; both their names have been crossed through on the title-page as they were both "auctori damnati".

The woodcut maps are mostly from the 1522 Fries edition printed by Grüninger, with a few amendments; the final world map is signed by Lorenz Fries and dated 1522, and contains the first use of the word "America" in a Ptolemaic map. For this edition the woodcut borders and headpieces have been removed.