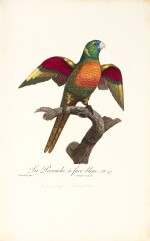 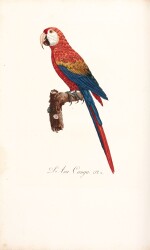 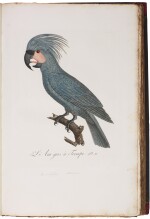 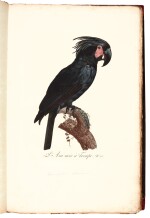 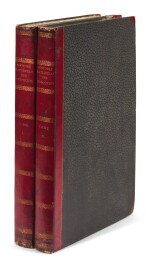 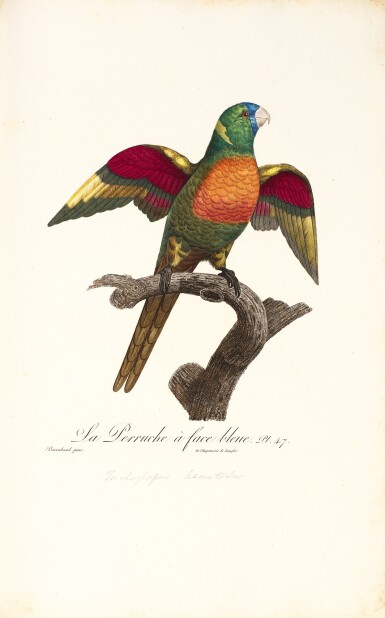 A HIGHLY ATTRACTIVE WORK ON PARROTS.

François Levaillant (1754-1823), son of the French consul in Suriname, and one of the most famous French ornithologists. He is the author of many fine books on birds, of which this is one of the most famous. He was one of the pioneers in using coloured plates and vernacular French for illustrating and describing birds. This was different to his contemporary, Carl Linnaeus, who formalised binomial nomenclature for naming organisms.

Jacques Barraband (1767-1809) was a French zoological illustrator, often considered to be the greatest ornithological artist of his time. He produced paintings for the carpet manufacturers Gobelins and Savonnerie, designed porcelain decorations, and in 1806 he decorated the dining room of Napoleon in Saint-Cloud.

Napoleon, like Louis XIV before him with the famous King's Cabinet, loved to offer this spectacular work to the crowned heads of his time. "After he made himself Emperor, it was part of Napoleon's deliberate policy to initiate a series of magnificent publications that would vie with those undertaken on the orders of Louis XIV. These were sent as presents to crowned heads, men of science, and learned bodies, in evidence of the splendours of the Empire... The works of Levaillant owe their sumptuous character to this impetus. His Histoire Naturelle des Perroquets is, unwittingly, one of the glories of Napoleonic France" (Fine Bird Books). A quarto edition was published simultaneously.