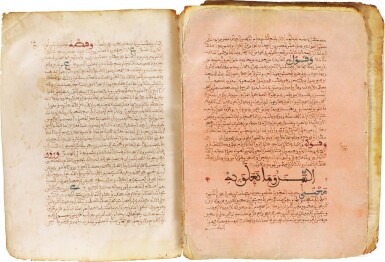 Unbound and loose leaves, stains and rubbing, some holes, in fair condition, as viewed.

Written in a neat and elegant 'Andalusi' script, the manuscript is written on both parchment and paper, an unusual combination found occasionally on manuscripts copied in Spain (for another example see a Grammatica copied in Spain and dated 558 AH/1162-63 AD, now in the Bibliothèque National, Paris, inv.no. Ms.Arab.6499, published in Loveday 2001, p.9).

Malik b. Anas (d.795 AD) founded one of the four orthodox schools of Islamic law (madhhab) later known as the Maliki. In his Kitab al-muwatta’ he incorporated for the first time fiqh and hadith and arranged them thematically. His work was very popular all across the Mediterranean and was introduced to Spain soon after his death and adopted as the official madhhab by the Umayyad dynasty. Several copies of the original text as well as commentaries copied in North Africa and Spain have survived. A copy written on paper and dated to twelfth century sold at Christie’s London, 26 April 2018, lot 7, whilst another group written on paper and dated to the thirteenth century sold at Christie’s London, 24 April 2015, lots 252, 256 and 258. A copy written on vellum sold in these rooms, 24 April 2013, lot 2.