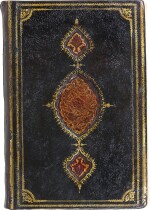 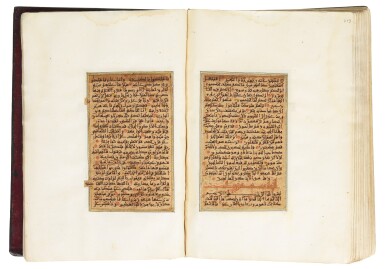 This is an important single-volume Qur’an which relates to several other manuscripts of the eleventh and twelfth centuries. The closest parallel is a Qur’an in the Khalili Collection (inv.no.QUR124, published in Déroche 1992, p.168), which is characterised by similar dimensions, comparable surah headings and similar writing style, identified by Déroche as Style NS.I. The main differences between the two is the absence in the current one of a bolder bismillah below the surah heading and the use of a wider colour palette for the diacritics, shadda and sukun. A similar section, also re-margined and dated to the twelfth century, sold at Christie’s London, 10 October 2014, lot 258. Other related manuscripts with similar features are as follows: a Qur’an in the Khalili Collection, London (inv.no.QUR94, published in Déroche, pp.180-1); a Qur’an sold at Christie’s, London, 11 April 1989, lot 52; three Qur'ans sold in these rooms 6 April 2011, lot 178; 6 October 2010, lot 12 and 3 October 2012, lot 7.