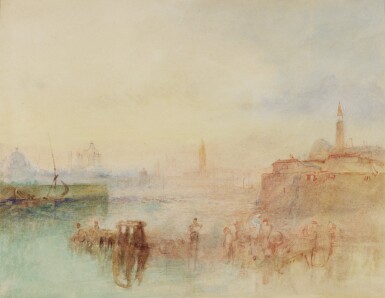 watercolour, heightened with pen and red ink and stopping out

The work has been well preserved. The pigments are fresh, although some of the most delicate pigments have soften slightly. This slight fading does not disturb the overall impression of the work.

A gift from the above to the mother of the present owner, circa 1960

William Ward painted this watercolour in 1881, and has taken his subject from Turner’s atmospheric study of Venice (painted in 1840), which formed part of the Turner Bequest and that was exhibited at the National Gallery, London, in 1857. The work is now held at Tate, Britain, London.

This watercolour was acquired by the Manchester based stockbroker and Ruskinian; William Abercrombie (1838-1908). Also in common with that lot, it seems highly likely that the note on the reserve of the frame was written by William Abercrombie himself. The main body of the text is taken from volume XIII, page 211 of The Complete works of John Ruskin and reads: ‘It is low water, and the exposed beach is carefully expressed in the middle distance. Note that even in the apparently hasty passage on the left the painter has carefully marked the separate knots of the furled felucca sail. Anyone else, in a hurry, would assuredly have drawn one continuous line for the sail, and then the dots or lines across it; it is much more difficult, and implies more deliberate purpose, to draw the sail itself in broken dots all the way down, implying that, where it is tied to the yard, the yard and sail together are so slender as to be lost sight of.’

We are very grateful to Professor Stephen Wildman for his help when cataloguing this lot.