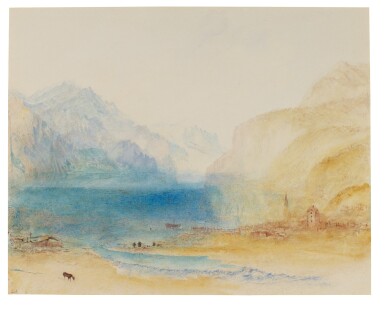 The work is well preserved. The sheet is not laid down, but attached to the back board at various points verso.

Thomas Coglan Horsfall (1841-1932; acquired from the artist, upon the advice of John Ruskin); thence by family descent

William Ward was a clerk in the City of London who became a friend and pupil of John Ruskin (1819-1900). In 1854 and 1855 he studied painting at the Working Men’s College and was later encouraged by Ruskin to make copies after Turner's watercolours. Turner painted his watercolour as a 'sample-study', from which he worked up a 'finished' drawing for his important patron; Hugh Monro of Novar (1797-1864). The study is now part of the Turner Bequest at Tate, Britain, while Monro's watercolour is in the Yale Center for British Art, New Haven.

The provenance of this watercolour is interesting, having originally belonged to the Manchester born philanthropist; Thomas Coglan Horsfall (1841-1932). Ruskin and Horsfall were friends and, family tradition suggests that it was Ruskin who advised Horsfall to acquire the present work.

We are very grateful to Professor Stephen Wildman for his help when cataloguing this lot.