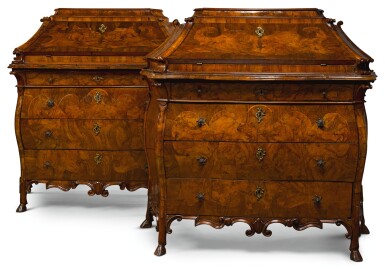 each with sloping front opening to reveal a fitted interior flanked by scrolling brackets, above a small drawer and three large drawers, with scalloped moulded apron and short splayed feet

These very impressive pieces are in overall good conserved condition. One with two back feet which have been broken and repaired. Both with repairs to mouldings and veneers. One with a split to the left side which has been repaired and is barely visible. Very minor losses to veneers throughout. Minor old marks and scratches consistent with age and use. Metalwork apparently original. These are very impressive pieces with rich veneers and now ready to be placed.

These bureaux showcase the skills of 18th century Lombardian cabinet makers whose creativity, notably channeled through their expertise of the inlay technique, reached a peak towards the middle and end of the century. In general, Lombardian bureaux distinguished themselves for their veneers in walnut, the delicate decoration of the cartouches and for their characteristic shape. This pair of impressive bureaux are particularly eye-catching for the subtle transitions from walnut to burr-walnut further punctuated by delicate mouldings adding more character and elegance to the pieces.

The present type of bureau is traditionally called in Italian “cassetone a sarcofago” or “cassetone a cofano” because of the top section of the bureau recalling the form of a funerary urn. The curves of the legs and mouldings against the veins of the walnut and burr walnut create a charming flow of lines throughout the piece. The more typical bureaux of the same shape featured ebonized borders and mouldings across the surface (see S. Colombo, op.cit., fig.390). This pair however adopts a sober look, rectilinear and announcing in some ways the transition from the baroque to the neoclassical style. Similar bureaux are illustrated in S. Colombo, op.cit., figs. 469/470 and in A. Disertori, op.cit., p.189. A related example was sold at Sotheby’s London, 5 December 2017, lot 645.

Villa Alari, also known as the Villa Visconti di Saliceto, is a Rococo style rural palace in Cernusco sul Naviglio, in the Province of Milan. Constructed between 1703 and 1719, the palace was commissioned by Giacinto Alari (1668-1753) from the roman architect Giovanni Ruggeri. The villa, which famously conserved its architecture and interiors, is one of the most important "ville di delizia" (villa of delights) of 18th century Lombardia.

Between 1772 and 1776, the villa welcomed the Archduke Ferdinand, Governor of the Duchy of Milan between 1765 and 1796, and his wife Maria Beatrice Ricciarda d'Este, Duchess of Massa.

After the death of Saulo Alari, Giacinto’s grandson, in 1831, the villa was sold to the Visconti di Saliceto.