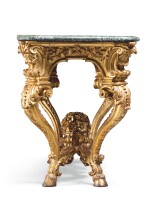 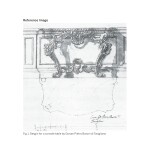 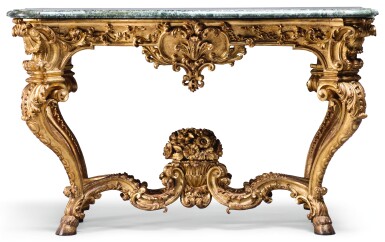 with a verde Alpi marble top, on cabriole legs joined by an X stretcher centred by a basket of fruits and flowers

In generally good restored condition. Generally with minor cracks, chips and scratches to wood consistent with age and use. Minor rubbing to gilding througout. The tip of the crest shows signs of a break, which has been restored. The marble top with very minor chipping to the edges and one visible, but reinforced crack running along 33cm departing from the middle of the right side of the top. Evidence of an old woodworm activity, which no longer appears to be active. An impressive piece with great quality carvings. Ready to place.

Please note the image in the catalogue has been flipped.

Please note this is a side table and note as stated in the printed catalogue.

The richly carved motifs of this impressive side table with voluted scrolls combined with large-scale rocailles relates it to other Piedmontese consoles produced in the 1730s and 1740s. The extraordinary quality of the carving, visible down to the stretcher, reaches its pinnacle in the delicate foliate mouldings of the front rail and in the leg with two C scrolls forming an S scroll, graceful yet exuberant at the same time.

The table’s ornamentation epitomizes the rococo style dictated in Turin by the Italian Filippo Juvarra named First Architect to the King of Sicily, Duke of Savoy, who charged Juvarra with transforming Savoy's capital. The design of the present table relates to a drawing of a console table published by the French carver and designer Nicolas Pineau in 1737 as the frontispiece of ‘Nouveaux desseins de Pieds de tables, de Vases et de Consoles’ - a publication which has highly influential in Italy. The curves of the legs are also similar to a drawing of a console table by Juvarra’s student and collaborator Giovanni Pietro Baroni di Tavigliano (Torino, Biblioteca Nazionale, Ris. 59.20/31, Fig. 1). The table, directly inspired after the drawing is now in the Palazzo Reale of Turin and displays Juvarra’s playful and harmonious rococo style.