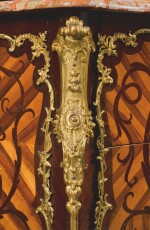 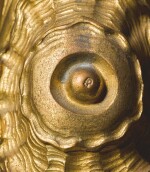 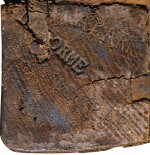 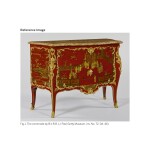 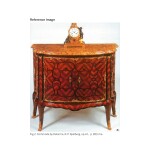 PROPERTY OF A PRINCE

PROPERTY OF A PRINCE

The condition report is currently not available. For further information, please contact Florence Flood at florence.flood@sothebys.com.

A. Pradère, French Furniture Makers: The Art of the Ébéniste from Louis XIV to the Revolution, London, 1989, p. 180;

Adrien Delorme is considered as one of the most prestigious French ébéniste of the 18th century. Delorme's genius shines through this commode which channels his ability to innovate and his attention to quality and meticulous craftsmanship. Here, the foliate motifs govern the marquetry jigsaw puzzle inside and this playful design is punctuated with refined yet luxurious gilt-bronze mounts. In the end, the commode charms with its free-spirited character that finds no known equivalent in Delorme’s oeuvre.

The gilt-bronze mounts of this commode are of a remarkable quality and fineness. The design of the vertical mounts on either side of the cartouche is found on one of Jacques Dubois’ commode supplied by the marchand-mercier Thomas-Joachim-Hébert (1687-1773), sold Christie's London, 7 July 2011, lot 627. Furthermore, identical cartouche mounts are featured on a commode by Bernard II Van Risen Burgh (B.V.R.B.) supplied to Queen Maria Leczinska in 1737 (Musée du Louvre, inv. no. OA 11193). The later comparison underlines an important relationship between Delorme and Hébert and more specifically Hébert’s gilt-bronze supplier which evidently worked with one of the most celebrated ébéniste, alongside Delorme, B.V.R.B. II. The central cartouche and the shape of the carcass were almost exclusively used by B.V.R.B. with other examples in the collections of the Victoria & Albert Museum (inv. no. 1094-1882) and J. Paul Getty Museum (inv. no. 65.DA.4 and inv. no. 72.DA.46) -fig.1.

A small group of Delorme's furniture pieces, which includes this commode, adopt an innovative style which has become almost systematically associated to the Parisian cabinet maker. These pieces share a common characteristic: a surface veneered with a contrasting marquetry of tulipwood and amaranth depicting sinuous foliate lines, framed by complimentary gilt-bronze mounts. Two other examples following this style by Delorme are recorded:

Geoffrey de Bellaigue, as he writes about a secrétaire with an interior featuring a similar zebra-type marquetry, speaks of a similarly veneered commode formerly in the collection of the Marquess of Landsdowne (seen in 1969 at Frank Partridge & Sons Ltd) - De Bellaigue, The James A. de Rothschild Collection at Waddesdon Manor, Vol I, London, 1974, p.280).

Son of François Delorme, Adrien belongs to a long line of craftsmen whose original last name is Faizelot. Established at rue du Temple in Paris, Adrien quickly became known as a craftsmen and merchant of furniture pieces. Bombé commodes with marquetry, lacquer or vernis martin panels were an important part of his production and a study of these examples showcase the ébèniste's predilection for the Louis XV style.

Adrien Delorme retired in 1783, the year in which his stock including a large quantity of commodes were dispersed at auction (Annonces, affiches et avis divers, 28 février et 29 avril 1783).