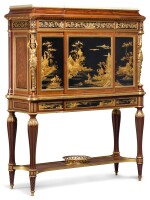 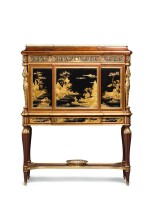 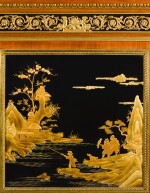 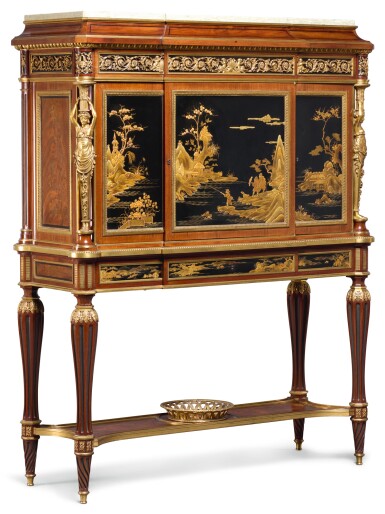 the rectangular light green marble top above a frieze, the fall-front slightly breakfront form and inlaid with three lacquer panels, the interior with one ajustable shelf; the front corners each faced with a female terms supporting a basket; on three short drawers with lacquer panels, raised on fluted baluster legs joined by a platform on spirally fluted tapering feet

In overall very good condition. Generally with minor old marks and scratches consistent with age and use. The gilt-bronze slightly tarnished in some areas. The lacquer surface with very minor cracks and losses. The marble top in good condition, with minor chipping along the edges. Ready to place. Two keys.

This exceptional cabinet with lavishing Japanese lacquer panels epitomizes the fashion in the late 19th century of Parisian cabinet makers drawing inspiration from the Ancien Régime in order to create exciting designs that would appeal to the tastes of the 19th century art collector.

The present example is modeled after an ebony secrétaire with japanese lacquer panels by one of the most prestigious furniture makers, Adam Weisweiler (1744-1820) - see P. Kjellberg, Le Mobilier français du XVIIIeme siècle, Paris, 2002, p.907. Supplied on 11 January 1784, the cabinet was delivered to Louis XVI's Cabinet Intérieur at Versailles ensuite with a table delivered to the Queen Marie-Antoinette (see M. Segoura, Weisweiler, Paris, 1983, p.42).

Reçu maître in 1778, Weisweiler was one of the most prestigious and brilliant ébènistes from the end of the reign of Louis XVI. He received many commissions from the Court, and most often through the intermediary of the marchand-mercier Dominique Daguerre. His work is characterized by a certain originality and a constant research for new forms and materials. While marquetry is quite rare in his work, he is better known for his use of Sèvres and Wedgwood porcelain plaques and Japanese lacquer panels.

The overall structure of this cabinet, the exceptional quality of the mounts, in particular the frieze, Grecian caryatids, supports and fluted feet joined by a stretcher are characteristically Weisweiler. The mounts on the top frieze with two putti playing the trumpet are probably after a drawing by G.P. Cauvet (Frises et ornaments à l'usage des sculpteurs, Paris, 1777 - see M. Segoura, Weisweiler, Paris, 1983, p.108). A related pair of cabinets stamped Weisweiler are in the collections of the Metropolitan Museum of Art, New York (inv. no. 1977.1.13 and 1977.1.14).

Furniture makers such as Maison Krieger exploited in the 19th century the skills and techniques of the Ancien Régime and enjoyed surpassing the quality achieved of previous generations.

Antoine Krieger, who arrived in Paris from Alsace, is first recorded as working in Paris in 1826 with his brother, Nicolas. In the second half of the century the firm went through various changes as his sons in law became involved. Although the company name changed from "Maison Racault et Cie", to "Damon et Cie", and then, "Damon et Colin" and finally around 1909 to "Colin et Courcier", furniture continued to bear the signature Krieger or Maison Krieger. Established in the 1850s in the Faubourg Saint Antoine and with other workshops in Paris and abroad, the firm's studio was known to have produced over nearly one hundred years a wide range of furniture pieces of high quality in either a more or less exact copy of 18th century models or updated models of a traditional nature. The clientele spanned from Egypt to Florida and beyond.