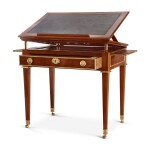 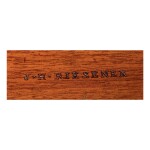 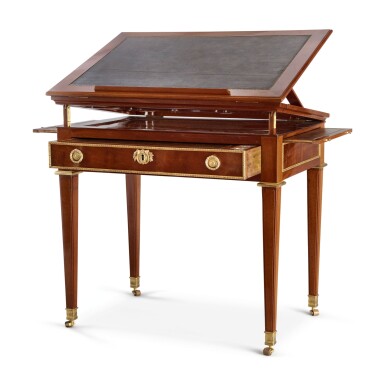 stamped J.H.RIESENER twice on the upper rear legs and D.L.ANCELLET once underneath

The French version of an architect's table with a hinged ratchetted writing surface is called a table à la tronchin, named after the prominent Geneva physician Théodore Tronchin (1709-1781), a contributor to Diderot's Encyclopédie who advocated working at a table with an adjustable writing surface that could even be used whilst standing as a way of improving posture and avoiding ailments of the bones and joints. The model became popular in the late Louis XVI and Directoire periods.

This examples bears the stamp of both Riesener and the lesser known ébéniste Denis-Louis Ancellet, whose stamp has also been found on several documented works by Riesener's contemporary Weisweiler, suggesting Ancellet may have collaborated with or been sub-contracted by his more illustrious peers in the Parisian cabinetmaking trade of the late 18th century. Much of Ancellet's surviving work is in a similar restrained character to the present lot, employing high quality mahogany with discreet gilt-bronze mounts - a style also corresponding to Riesener's output of the late 1780s when he shifted away from the emphasis on elaborate marquetry inlay and opulent gilt bronze mounts seen previously on his commissions for the Royal Garde-meuble in favour of fashionable mahogany veneers inspired by both English furniture design and the work of the neoclassical German cabinetmaker David Roentgen.

A comparable table à la tronchin stamped Riesener was sold Christie's London, 6 July 2016, lot 62, and another similar table by Ancellet was in the Wildenstein Collection, sold Christie's London, 14-15 December 2005, lot 201. A more modest version by Ancellet was acquired in Paris by Thomas Jefferson for use at his seat in Monticello outside Charlottesville, Virginia, where it remains in situ.