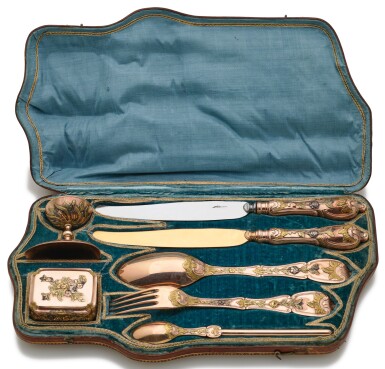 lavishly chased, comprising two knives, one with a gold blade, a spoon, a fork and an integrated marrow scoop and spoon, as well as a reversible egg cup with chased narcissus and leaves, and a small footed spice box with two compartments, in original fitted tooled leather case, Brünn control marks 1806-1824, struck 'F20' for 20 carat gold, later French import marks

A number of similar necessaires comprising gold cutlery, a spice box or a salt, and often an egg cup, can be found in the Royal Danish collections (see A King's Feast. The Goldsmith's Art and Royal Banqueting in the 18th century, exhibition catalgue, Copenhagen and London, 1991, cat. nos. 238-243). Although these sumptuous sets in velvet-lined gold-tooled cases have previously been identified as travelling nécessaires, recent research considers it probable that they were kept in their cases at each court, only to be used by a specific person, with the case protecting the contents from being mixed with other sets and from wear and tear.

The control marks on the present lot for the town of Brünn, now Brno, prove the necessaire's whereabouts in what is now the South Moravian Region of the Czech Republic, and at the time was lower Austria. In December 1805, the Battle of Austerlitz was fought near the city, and while Brno itself was not involved with the battle, Napoléon Bonaparte, Emperor of the French, spent several nights there. The control marks were struck onto silver and gold objects during the time in which taxes were imposed by the Austrian government to pay for the wars against Napoléon, meaning the owner would - unsurprisingly, given its quality - have chosen to pay taxes for this necessaire de table in order to be able to keep it.

Although traditionally assigned to Augsburg, the quality of the chasing, the use of vari-coloured gold and the positioning of the flowers, the scrolls and the leaves are very similar to chasing on gold boxes and other objects of vertu that were made in Berlin between circa 1755 and 1770, and even more so to chased gold objects from the southern German city of Hanau, whose bijoutiers also supplied major European courts. Although most of the necessaires de tables in the Danish Royal collection were made by goldsmiths from Copenhagen or Vienna (Danish Royal collections, op.cit, no 238, no 242), the fact that 20 carat gold was used for the present lot could equally point towards a German goldsmith, especially when considering that Hanau goldworkers were contractually bound to use at least 18 or 19 ct gold as a minimum.