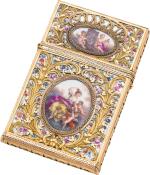 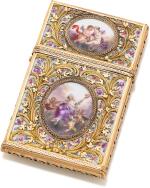 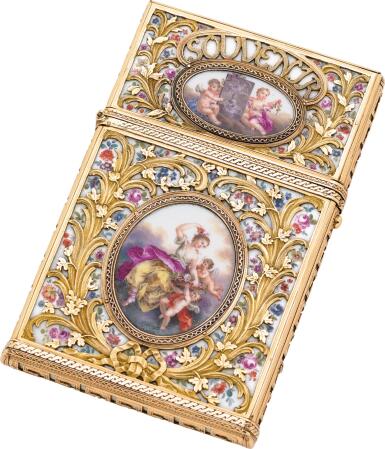 of upright rectangular form, the porcelain panels on front and back painted with celestial nymphs and putti perched among clouds, that on the front lid with two cherubs holding the portrait of a lady seated writing while Father Time hovers above, below the openwork inscription: Souvenir, the ground scattered with colourful flowers, mounted en cage  with delicate ribbon-tied palm fronds and garlands, the white porcelain side panels under gold Greek key pattern mounts, the interior complete with ivory writing slips and gold-topped pencil, apparently unmarked

The top left corner of one of the original writing slips from the interior missing, very light surface wear of circa 3 mm on the rim on the left side (next to the hinge)

This lot contains ivory. Due to recent changes in the laws of many countries (e.g. US, France) Sotheby's recommends that buyers check with their own government regarding any importation requirements prior to placing a bid. For example, US regulations restrict the import of elephant ivory and prohibit the import of African elephant ivory. Please note that Sotheby's will not assist buyers with CITES licence applications where a buyer elects to either collect or arrange their own shipping, nor will Sotheby's assist with the international movement of ivory by air, either as freight or through hand carry. Sotheby's shipping will only assist in shipping the lot to either domestic UK or EU destinations, where delivery is made by road transport. A buyer's inability to export or import these lots cannot justify a delay in payment or sale cancellation.

It has long been known that Johann Christian Neuber produced many types of small Galanteriewaren as well as the snuff boxes and Steinkabinette for which he is famed, such as the souvenirs, cane handles, buttons and bodkin cases listed in his advertisements in magazines such as the Journal des Luxus und der Moden of 1786. A small number of carnets de bal, also known as souvenirs, have survived, the majority inlaid with the colourful hardstones that were Neuber's speciality, such as the chequered and garlanded example in the Louvre (Grandjean, Les tabatières du musée du Louvre, Paris, 1981, no. 432).

Recent research instigated for Alexis Kugel's book, Gold, Jasper and Carnelian, Johann Christian Neuber at the Saxon Court, London, 2012, has confirmed that, early in Neuber's career, he created two distinctive but linked groups of object: the first group are inlaid with moss agate bosses set within coloured gold flowery cagework (including a carnet de bal, op. cit. cat. no. 194); the second group of cagework boxes (cat. nos. 10, 11, 12) are inset with hardstone and painted Meissen porcelain plaques in much the same spirit as present example.