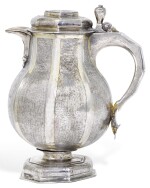 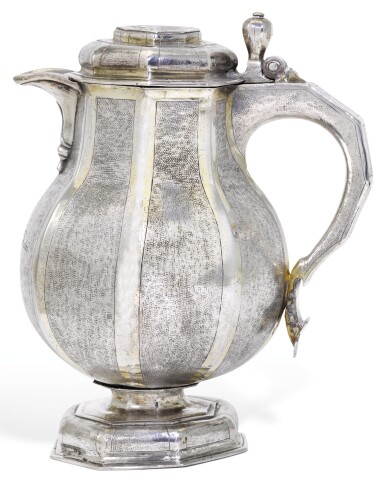 A few little repairs to foot and greater repairs to the cover including rivetted patch and a hole, nice colour overall and condition of the body good, maker's mark on foot struck twice, possible town mark illegible as pierced for a pin now missing.

A tankard and bowl by the Swedish goldsmith Valentin Lennartson Weber of Linköping, (circa 1640), which share significant features with this jug such as the faceted sections, identical thumbpiece and plain bands along the ribbing, are illustrated in Källström and Hernmark, Svenskt Silversmide 1520-1850, 1940/41, vol. I illus.  nos. 103 and 144. Weber became the second husband of Marina Larsdotter (died 1646) whose first husband was Peter Hennich. Peter Hennich’s makers mark is unrecorded, but his son Henning Petri’s (of Nyköping) mark is identical but with the letters reversed. See: Andrén, Hellner, Hernmarck and Holmquist, Svenskt Silversmide 1520-1850, Stockholm 1963, pp. 413 and 488.

The Latin inscription (Sign of Faith) probably refers to the confession of Lutheran Faith, known as the Augsburg Confession declared after the Diet of Augsburg of 1530. Lutheranism became the state religion in Sweden at the end of the 16th century.

The English coat of arms (per fess, sa. and ar. a demi lion issuant of the last, and in base a cinquefoil) and crest (the bust of Queen Elizabeth I) are probably those of Weldon of Swanscombe, Kent. According to The History and Topographical Survey of the County of Kent, vol. 2 (originally published by W Bristow, Canterbury, 1797), ‘There is a ferry [at Swanscombe] across the Thames into Essex, for horses and cattle only, which anciently belonged to the priory of Dartford; at the suppression of which, in King Henry the VIIIth's reign, it was granted to John Bere for a term of years, and afterwards by Queen Elizabeth in her 2d year, with the manor of Swanscombe to Anthony Weldon.’ The Swanscombe estate remained with the Weldon family until shortly after the death in 1731 of Walker Weldon Esq., (owner of Rochester Castle) when it was sold by his heirs to Thomas Blechynden Esq. (d. 1740).