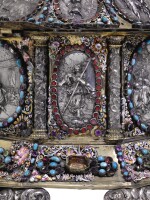 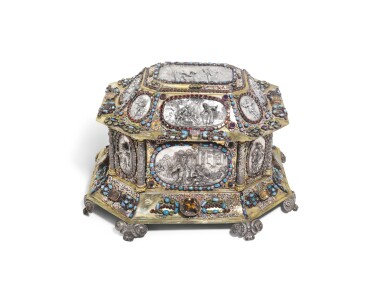 Considerable wear to black enamel on exterior rims of body and cover, relatively minor wear to same on the inside, split at hinge section of cover and loss of one hinge pin, losses of some cold painted elements and enamel pieces, little splits and old repair to plaquette in the base, about 14 coloured stones missing from cover and about 2 from body, some minor denting, possibly missing rock crystal or glass inset inside the body, town and maker's mark on body, cover and foot (not just body and cover).

Seven other caskets of this richly decorated type by Augsburg goldsmiths working between 1640-1700 have been identified (Helmut Seling, Die Augsburger Gold und Silberschmiede 1529-1868, Munich, 2007). All are in princely collections (The Schatzkammer of the Residenz, Munich and the Green Vaults, Dresden), except one which probably belonged to Baron Carl von Rothschild of Frankfurt, one of the greatest collectors of German silver, descending via his daughter Emma Luise and sold at auction (Sotheby's, London, 26 April 1937, lot 198). The Rothschild example which bears close comparison with the present casket including the black enamel was hallmarked by Johann Heinrich Mannlich, whose father Hans Heinrich made a table clock (Residenz, Munich) with similar ornament as the casket now offered, including the black enamel.

The contemporary Saxon inventories describe these richly ornamented caskets in the Green Vaults, Dresden as Schmuck Kästgen, although it is not clear if Jewellery refers to the ornament or what was kept inside. It may be the former due to the delicate nature of the cold-painted black enamel inside, which would not have survived much use. One of the Dresden caskets sits on silver-gilt mounted rock crystal feet showing only vestiges of this black enamel which may also have worn off the leading edges as it appears to have done on the Mannlich clock in Munich. (ref. Lorenz Seelig, Silber und Gold, Augsburger Goldschmiedekunst für die Höfe Europas, Bavarian National Museum, Munich, February-May 1994, illus. 58)

A specialist plaquette maker himself, the goldsmith Peter Winter collaborated with Andreas Thelot the most famous Augsburg plaquette maker of his generation, on an altar clock of 1690-98, made for the Kölnischen Zimmer of the Residenz, Munich (Seling 1846e).

The stories referred to by the plaques on the casket are exotic and attest to the wide education received by the princely recipient of the time. They combine mythological and Old Testament stories. In the base, one of the two hallmarked examples, the two ‘spies’ appear to give their positive report on the Promised Land to Aaron. Some of the plaques are decorative, replacing the figures in niches cast in the round that appear on other caskets of this type such as one of the examples in the Green Vaults Dresden (Seelig, 1994, no. 58). The remainder largely tell of Cephalus and Procris, who despite their love, doubted each other’s faithfulness, including a deceitful seduction reconciliation, and an ultimate tragic shooting when Procris who unfairly spies on Cephalus while hunting is mistaken for a wild animal and shot by her husband.