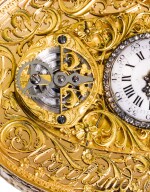 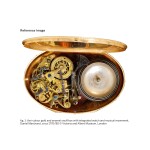 oval, the lid with an elaborate engine-turned moiré pattern, within a chased border of flowers alternating with wreath ornaments and scrolls on a sablé ground, centred with a chased hinged medallion representing musical trophies, opening to reveal the enamel dial with Roman numerals and diamond-set hands and bezel, flanked by engraved and pierced double-screwed cocks for the open mainspring with visible stop-work and a plain steel three-arm balance to the cylinder escapement; the sides with chased flower-filled urns below ribbons on a sablé ground as dividers, alternating with moiré engine-turning, below a two-tiered rim chased in lively fashion with baskets of flowers and garlands above a colonnade, centred by a female mask, a small button above opening the hinged lid to reveal the movement, within exuberant openwork scrolls with integrated retailer's signature: Marchand fils A Paris, maker's mark AP above a flowerhead within leafy sprigs

Extremely smart box in excellent condition; one very fine surface tear of circa 5 mm length to the right side only.

Watch movement complete and would just run at cataloguing, but would benefit from a light professional clean and service.

Sotheby's does not guarantee the functioning of the movement.

This magnificent gold box undoubtedly belongs to a small group of high-quality boxes, which were probably made in Hanau between 1760 and 1775, struck with a similar set of marks: AP crowned, AP over C crowned, or MP and MP crowned, each surrounded by leafy sprigs. The Wallace Collection owns four such boxes (Charles Truman, The Wallace Collection Catalogue of Gold Boxes, London, 2013, cat. nos 73 - 76). The most similar to the present lot in terms of the chasing is no 76, struck with the maker’s mark AP over C crowned. The present lot has the crowned initials AP above a flower surrounded by sprigs, but it is probable that these two boxes were made by the same makers in different business groupings, with the letter C probably being an abbreviation of ‘Compagnie’. Hanau had established a system of ‘Fabriken’, very similar to the ‘Fabrique’ in Geneva, a network of goldsmiths, engine-turners, casemakers, watchmakers and enamellers (see Julia Clarke, 'The Geneva Fabrique: Watch case makers to enamel painters', in: The Majesty of the Chinese Market Watch, Ian White and Julia Clarke, London, 2019), to the extent that goldsmiths or gold workers would equally be called ‘Fabrikant’ in Hanau (Lorenz Caspari, Die Entwicklung des Hanauer Edelmetallgewerbes von seiner Entstehung im Jahre 1597 bis zum Jahre 1873, Freiburg, 1916, p. 127).

The Southern German town of Hanau flourished in the second half of the 18th century as one of the main centres of Galanteriewaren (small precious objects), the quality of which was even praised by Goethe as surpassing that of objects made in Geneva or Paris at the time (Johann Wolfang Goethe, Über Kunst und Altertum in den Rhein und Mayn Gegenden, Erstes Heft, Stuttgart, 1816, p. 114-117).

Apart from the present box, the only similar example with the rare unconcealed divided movement, signed in openwork in the same place: ‘Marchand [Fils] à Paris’, is a box decorated on the exterior with colourful moiré enamelling (Pescheteau-Badin, Paris, 25 November 1997, lot 144). Unfortunately the 'prestige' marks on that box were not recorded. It is also worth mentioning a gold and enamel musical box with integrated watch in the Victoria & Albert Museum (museum no. 898:1to:3-1882). This box has the crowned initials DMC, one of the maker’s marks of the bijoutier and émailleur, Daniel Marchand (1733-1794), who worked in Hanau. He was a brother-in-law of the renowned Hanau bijoutiers Les Frères Toussaint (see Lorenz Selig, 'Eighteenth century Hanau gold boxes', The Silver Society of Canada Journal, p. 40). Interestingly, the watch movement in this box is signed by the Genevois firm of Frères Wiss & Amalric (Truman, op. cit., p. 256). Exchange and competition marked the relationship between Hanau and Geneva, and it is entirely probable that movements made in Geneva were supplied to Hanau bijoutiers, just as Geneva painted enamel plaques were used on Hanau made boxes, especially when considering the numerous relationships between both cities, such as the marriage of a daughter of the famous Geneva box maker Jean George Rémond, with the son of Charles Colin from the prestigious Hanau gold box dynasty, Colins & Söhne (Julia Clarke, Swiss Snuff Boxes 1785-1835, in: Enamels of the World 1700-2000, The Khalili Collections, Haydn Williams, 2009, p. 298). Little is known about ‘Marchand & Fils’, the makers of the watch in the present lot, but a ‘Marchand Fils' is recorded in Geneva in the late 19th century (Brian Loomes, Watchmakers and Clockmakers of the World, London, 2006). It is possible that this ‘Marchand’ was directly linked to Daniel Marchand and his Compagnie in Hanau. And it is also possible that the movement originated from Geneva, as for the box in the V & A - Geneva watches were often marked as from Paris in order to improve their saleability in foreign markets. For an open face keywound verge pocket watch, signed Marchand & Fils, Paris, no. 422, with a brightly enamelled watch case typical for late 18th century Geneva, see Christie’s Important Watches sale, New York, 11 June 2014, lot 245.

The present beautiful and intriguing box is therefore not only a great example of state-of-the-art watchmaking, gold chasing and engine-turning but also of the probable cultural transfer between two important centres of bijouterie in the 18th century.