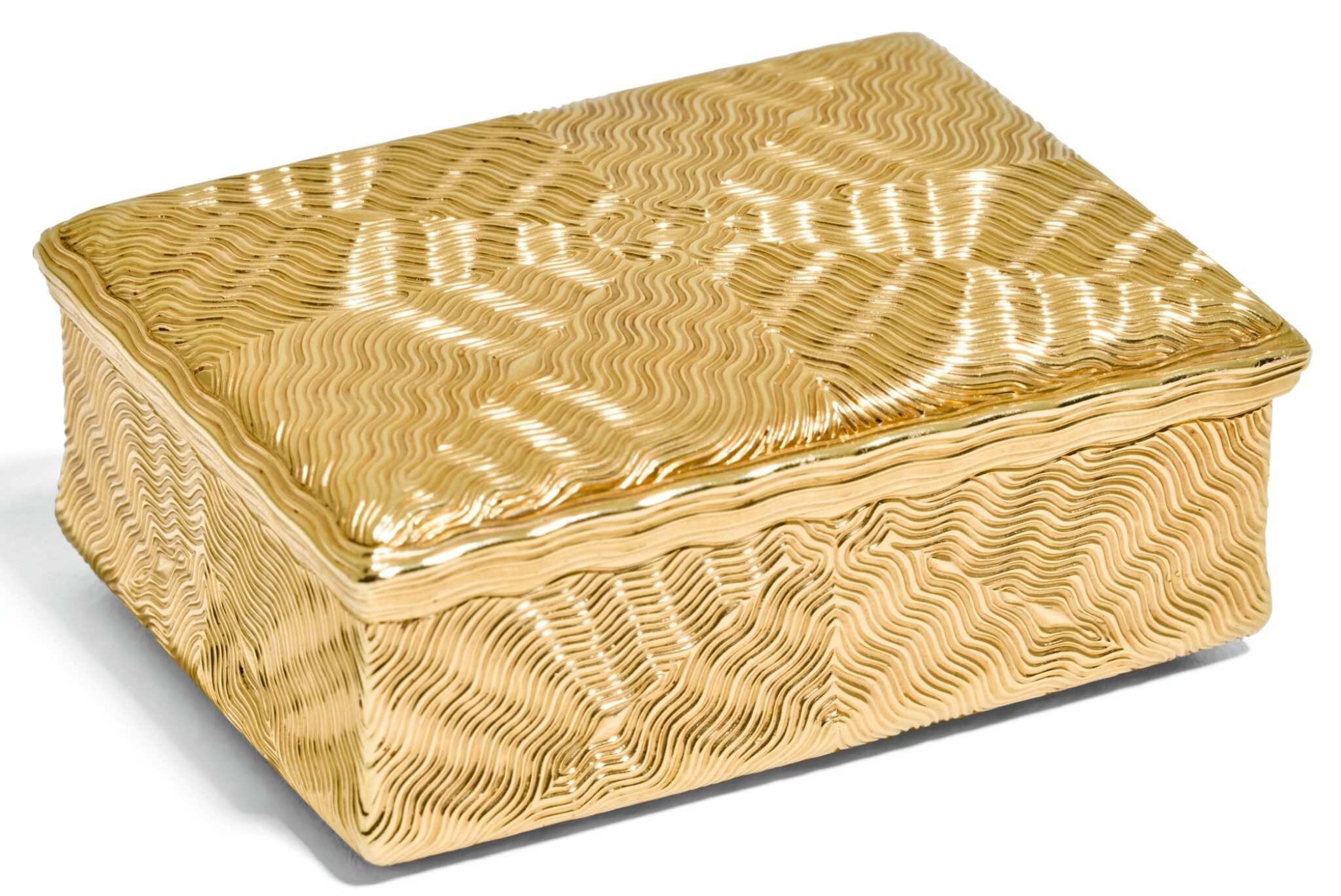 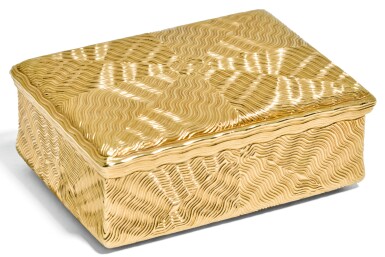 rectangular with shaped sides and raised base, elegantly patterned with concentric wavy engine-turning around four central axes, each with a small eye-shaped centre, the lid rim picking up the wavy design, the interior of the lid engraved: This Snuff Box was given by Frederick Prince of Wales / to Sir Thomas Bootle, 1749, above the Bootle family crest, maker's mark, charge and discharge marks of Louis Robin, Paris date letter for 1739

thence by descent until given to Enrique Fernandez Gallo in the mid 20th century;

The recipient of the box was Sir Thomas Bootle, lawyer and politician, born in 1685, as the eldest child of Robert Bootle of Maghull, north of Liverpool, Lancashire. He inherited the family estate upon the death of his father in 1708, the same year in which he began studying law at Lincolns Inn. He moved to the Inner Temple in 1712 and a year later was called to the bar. Bootle, a Whig in politics, entered parliament in 1724 as M.P. for Liverpool, which he held until 1734. Having lost his seat there he appealed to prominent Whig peer, Charles Seymour, 6th Duke of Somerset (1662-1748) and with his sponsorship secured the seat of Midhurst in Sussex, which he held until his death on 23 December 1753. In addition to all his other commitments he was elected Mayor of Liverpool in 1726/27.

In his profession as a barrister, Bottle developed a flourishing practice, earning, it is said in the 1730s, some 12 guineas a day, an unusually generous amount. In 1731, Bootle joined Nicholas Fazakerley (1682-1767) as counsels for the defence in the trial of Richard Francklin (d. 1765), the controversial Fleet Street publisher of The Craftsman, who had published an anti-government letter, thought to have been penned by Lord Bolingbroke. Francklin, a champion of freedom of the Press, had made an enemy of Prime Minister Robert Walpole, who had had him arrested every few months on the thinnest of pretexts. Francklin, who was found guilty in The Craftsman case and imprisoned for a while, had influential friends so was able to keep his business afloat. Among Bootle's other clients about this time were Sarah, Duchess of Marlborough, vehemently anti-government, and Edward Stanley, 11th Earl of Derby, another Whig supporter.

In 1733 Bootle was advanced to the position of Attorney General of the County Palatine of Durham, which he held until his death. Four years later he spoke in support of a £100,000 annual payment from the Civil List for Frederick, Prince of Wales. Then, upon the recommendation of the Duke of Somerset, to whom he acted as confidential adviser, he was appointed Chancellor to Prince Frederick. Following the latter's death in 1751, Bootle was made Chancellor to the new Prince of Wales, the future George III.

Bootle, who was never married, purchased Lathom House and its estate of 4,000 acres at Lathom, near Skelmersdale, Lancashire. He employed the Italian architect Giacomo 'James' Leoni (1686-1746) to demolish the existing house and replace it with a fine Palladian mansion, which took some 15 years to complete between 1725 and 1740. Upon Bootle's death (will proved 29 December 1753: National Archives, Kew, PROB 11/417), the bulk of his property passed to his brother, Robert (d. 1758), sometime a ship's captain and at various times between 1741 and 1755 a Director of the East India Company. The estate was inherited by the latter's son-in-law, Richard Wilbraham (1725-1796), who assumed the additional surname of Bootle. The Lathom House estate then became the property of the latter's son, Edward (1771-1853), who changed his name by royal licence in 1814 to Bootle-Wilbraham. He was elevated to the peerage on 30 January 1828 as Baron Skelmersdale of Skelmersdale in the County Palatine of Lancaster. Upon his death the estate and title descended to the latter's grandson, Edward Bootle-Wilbraham, 2nd Baron Skelmersdale (1837-1898), who was created Earl of Lathom in 1880.

The snuff box in this lot is mentioned in the 1st Earl of Lathom's will, which was signed, 28 December 1897 and proved, with codicil, on 25 January 1899: 'The following articles are to devolve as heirlooms, and follow the trusts of the settled estates – namely, gold snuff-boxes given by the Emperor of Austria, the King of the Belgians, and the Shah of Persia, a gold snuff-box presented to Sir Thomas Bootle by Frederick Prince of Wales . . .' (The Illustrated London News, London, Saturday, 4 February 1899, p. 172c)

The presentor of the box, Frederick Lewis, Prince of Wales was born on 20/31 January 1709 at the Leine Palace, Hanover. He was the eldest child of the future George II (1683-1760) of Great Britain and Ireland and his wife, Caroline, Princess of Brandenburg-Ansbach (1683-1737). The Prince spent most of his early years in Hanover and it was only in December 1728, as an adult and after the death of his grandfather, George I, that he was allowed to live in England. The long separation had damaged his relationship with his parents, which was never cordial. Instead, Frederick became acquainted with a number of patrons of the arts, such as Richard Boyle, 3rd Earl of Burlington and through him met the architect William Kent. The latter remodelled the White House at Kew for the Prince who began amassing a formidable art collection. Frederick's goldsmith, George Wickes, supplied many outstanding pieces of plate as well as gold snuff boxes. Politically his sympathies lay with the Whigs, much to the annoyance of his parents and the then Prime Minister, Horace Walpole. Dashing his supporters' hopes of his succeeding his father, Frederick, Prince of Wales died somewhat suddenly in early 1751 from the results of a chill after overseeing his workman at Kew. As Kimerly Rorschach has written, Frederick 'was the first important patron of the visual arts in Hanoverian England.' (The Walpole Society, vol. 55, 1989/99, introduction.)

Jean Ducrollay (1710-1787) was one of the most famous gold box makers in Paris, and examples of his work are to be found in the most distinguished international museum and private collections, such as the Gilbert Collection, the Metropolitan Museum, the Thurn and Taxis collection, the musée du Louvre and others. Some designs for engine-turning from the Ducrollay/Drais workshop survive in the Victoria & Albert Museum album (no. E.897-1988, illustrated Heike Zech, ‘Designs of the workshop of Jean Ducrollay and his successors’, in Murdoch/Zech, Going for Gold, Victoria & Albert Museum, 2012, pl. 4.10)), but the present gold box is yet more complicated in design despite its first deceptively simple appearance

Ducrollay's gold boxes are generally considered to have achieved the highest level of design and craftsmanship; this box has the additional benefit of an impeccable provenance. As Sacheverell Sitwell once explained, snuff boxes 'have indeed a doubled fascination; that of technique and that of association. For not only are they the most incomparably finished objects, the results of a series of technical processes any one of which could form a skilled profession in itself, but, also, we have the memory of those who handled them so that they become little personal things of ghostly evocation' (Sacheverell Sitwell, foreword in: A. K. Snowman, Eighteenth Century Gold Boxes of Europe, London, 1966).