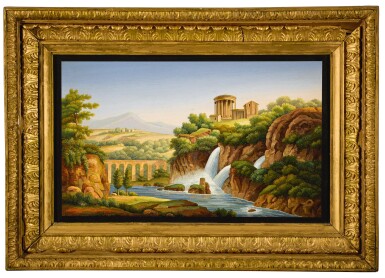 depicting the temples of Sibyl and Vesta, the St. Martino Bridge and the cascades of the Aniene River

The panel in overall excellent condition. The frame with some losses to the carved mouldings, especially to the tips of the acanthus leaves. And generally with minor chipping and losses to gilding. The back of the frame with a LACMA label and the inventory number L.83.18.2.

A. González-Palacios, and Steffi Röttgen with essays by Steffi Röttgen, Claudia Przyborowski; essays and new catalogue material translated by Alla Theodora Hall, The Art of Mosaics: Selections from the Gilbert Collection, Los Angeles, 1982, cat. no. 100, p.205.

This vibrantly coloured panel, of unusually large scale, depicts a particular view of Tivoli, favoured by painters and Grand-Tour enthusiasts. The subject of the Temples of Vesta and Sibyl was widespread amongst mosaicists who saw the opportunity to reproduce the monuments as souvenirs of the Grand Tour for their aristocratic clientele. The present panel is an important example showing the temples, St. Martino bridge and the spectacular cascading waterfalls of the Aniene river.

Originally called Tibur, Tivoli was founded on the Monti Tiburtini (Tiburtine Hills) five centuries before Rome in 1215 B.C. and became known for its sulphur mineral water springs. Accessed from the St. Martino bridge, the so-called Temple of Sibyl, and nearby the Temple of Vesta were erected towards the end of the Roman Republic in the early first century BCE. As one of the most famous monuments of Ancient Tibur, the Temples of Sibyl and Vesta, although often confused with one another, were one of the most frequently drawn and painted sites in the 19th century.

The circular temple, a colonnaded round monoptera, was probably dedicated to Vesta, the goddess of the hearth, whose cult was entrusted to the Vestals, or perhaps to Tiburno, the hero who gave his name to the city. The Temple of Sibyl is supposedly dedicated to the Tiburtine Sybil or Albunea worshipped as a goddess in Tivoli and bestowed with prophetic powers.