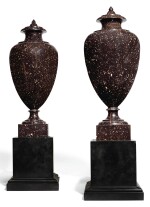 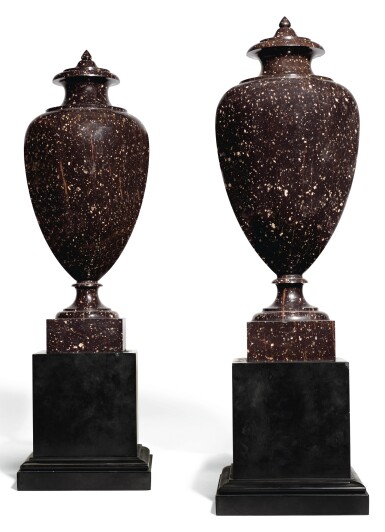 In overall good condition. Minor chipping to porphyry surface, particularly to edges and corners. Lid to one vase with one chip to each sides. Generally with minor old marks and scratches.

NOTWITHSTANDING THIS REPORT OR ANY DISCUSSIONS CONCERNING A LOT, ALL LOTS ARE OFFERED AND SOLD AS IS" IN ACCORDANCE WITH THE CONDITIONS OF BUSINESS PRINTED IN THE SALE CATALOGUE."﻿

Formerly in the Collection of Walter T. and Lucie Bigelow Rosen at Caramoor, Katonah;

then acquired by the current owner.

These vases are fine examples of Swedish porphyry from the early 19th century directly relating to the Swedish manufactures. They relate to C.F. Sundvall's designs for porphyry vases, which were executed around 1788-1790 and to those by the Court ciseleur Fredrik Ludvig Rung of 1799 (H. Sundblom, Porfyr, Stockholm, 1985, p.21 - fig.1).

Porphyry was first discovered in the valley of Älvdalen (Elfdal) in 1731 but was not commercially exploited until after 1788 by Eric Hagström under the direction of Nils Adam Bielke. Despite being always patronised by the court, commercial difficulties always existed and in 1818 the works were acquired by the new king Charles XIV, born Jean Bernadotte (1763-1844), who used them as a supplier of lavish diplomatic presents.

For several decades the workshops produced vases, urns and other monumental vessels often mounted with ormolu mounts either made in Sweden or mounted in France. Production largely ceased following the disastrous fire in 1869.

Walter Rosen (1876-1951), a successful international banker, musician, and art collector, met Lucie (1890-1968), a gifted musician, in 1914. Together, they purchased Caramoor as their country home in 1948. The house surrounded by beautiful Italianate gardens soon housed their large and eclectic collection of antiques. After their son's death, the estate was bequeathed and in 1945 Caramoor became a renowned performing arts center.