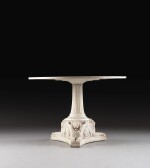 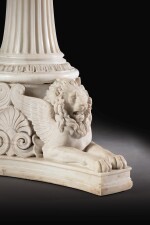 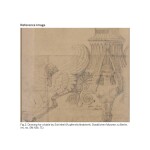 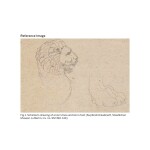 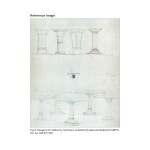 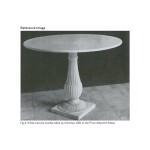 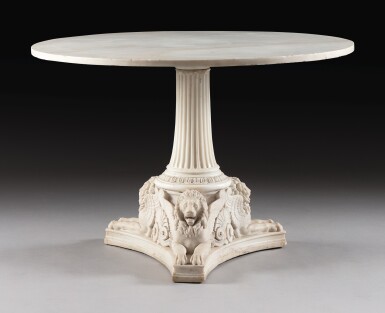 This high quality table is in good condition and ready to be placed. The top has chips to the edge as expected. The base has two chips to the top of the column pedestal which is not visible unless one looks underneath the table. The joint between the column pedestal and lion tripod has adhesive gesso. The wonderfully carved lion figures are in very good condition. The plinth base has minor chipping as expected especially to the corners. A truly elegant piece.

The aspirations of the leading German architect and designer to the Prussian Court, Karl Friedrich Schinkel (1781-1841) are evident in the design of the present table. By reviving the historic forms and techniques of Antiquity, Schinkel proves how instrumental he was in the development of Classicism in Germany.

The table can be firmly attributed to Schinkel on the basis of his drawings, which he made primarily for special commissions, and sketches he completed during his travels. The rich quantity of these design resources reflect Schinkel’s thoughtful creative and thinking process, developing forms and motifs through the years, and reveal the influences that impacted him during his career, such as that of Italy which he visited in 1804 and 1824/25.

Because Schinkel dedicated his attention to the overall aesthetic of his furniture pieces but most importantly to the smaller details, such as the depiction of a lion or of an anthemion, some of his drawings directly relate to the executed piece. The lion’s face and lion’s foot illustrated in a sketch dated from 1820/1830 are identical to that found on the present piece (Kupferstichkabinett, SMB, inv. no. SM 39d.144) (fig.1). Schinkel used quite extensively the classical motif of the anthemion (for example, see Schinkel, 2002, p.168, fig.1; p.172, fig.2.; p.193, fig.1; p.205). The anthemion, the motif of a winged figure, the fluting along the stem of a table, the egg and dart style frieze are reunited in the drawing of table supplied in 1836 to Princess Elizabeth of Prussia (Kupferstichkabinett, SMB, inv. no.: SM 43b.71) (fig.2). Finally, a sketch by Schinkel dated from 1825 outlines nine tables (Kupferstichkabinett, SMB, inv. no.: SM 37b.96) (fig.3). Of a similar style than the present lot, this group of tables all bear a plain top, thus emulating Antiquity examples. Two of these tables carved from Carrara marble and with red granite tops are now in Schloss Tegel. Another table was executed in Carrara marble and was supplied by Schinkel in 1831 to the Prinz-Albrecht-Palais in Berlin, Germany (fig.4).

To create his marble tables, Schinkel is known to have collaborated with some of his contemporaries such as the German sculptors Christian Daniel Rauch (1777-1857) and Christian Friedrich Tieck (1776-1851) - the second supplied the granite tops for the tables aforementioned in Schloss Tegel. Correspondences between Rauch and the Italian sculptor Gaetano Sanguinetti (d. 1842), based in Carrara, reveal that numerous tables were executed in white marble after drawings by Schinkel. For example, in a letter to Rauch dated from 18 December 1840, Sanguinetti estimates the execution of two tables in white Carrara marble with baluster-like bases, designed after drawings by Schinkel for a total cost of 100 ducats.

The surviving buildings in Berlin and Postdam and interiors designed by Schinkel are a testimony to the successful patronage he received from the Prussian Court and aristocracy. One of his first recorded commissions was notably a bed and toilet table for Queen Louise designed in 1809 for the Charlottenburg Palace, Berlin. Appointed Geheimer Orberbaurat (Director of Works) in 1815 in the Prussian Office of Public Works, his works altogether show his astute sense for German idealism and for technical mastery.