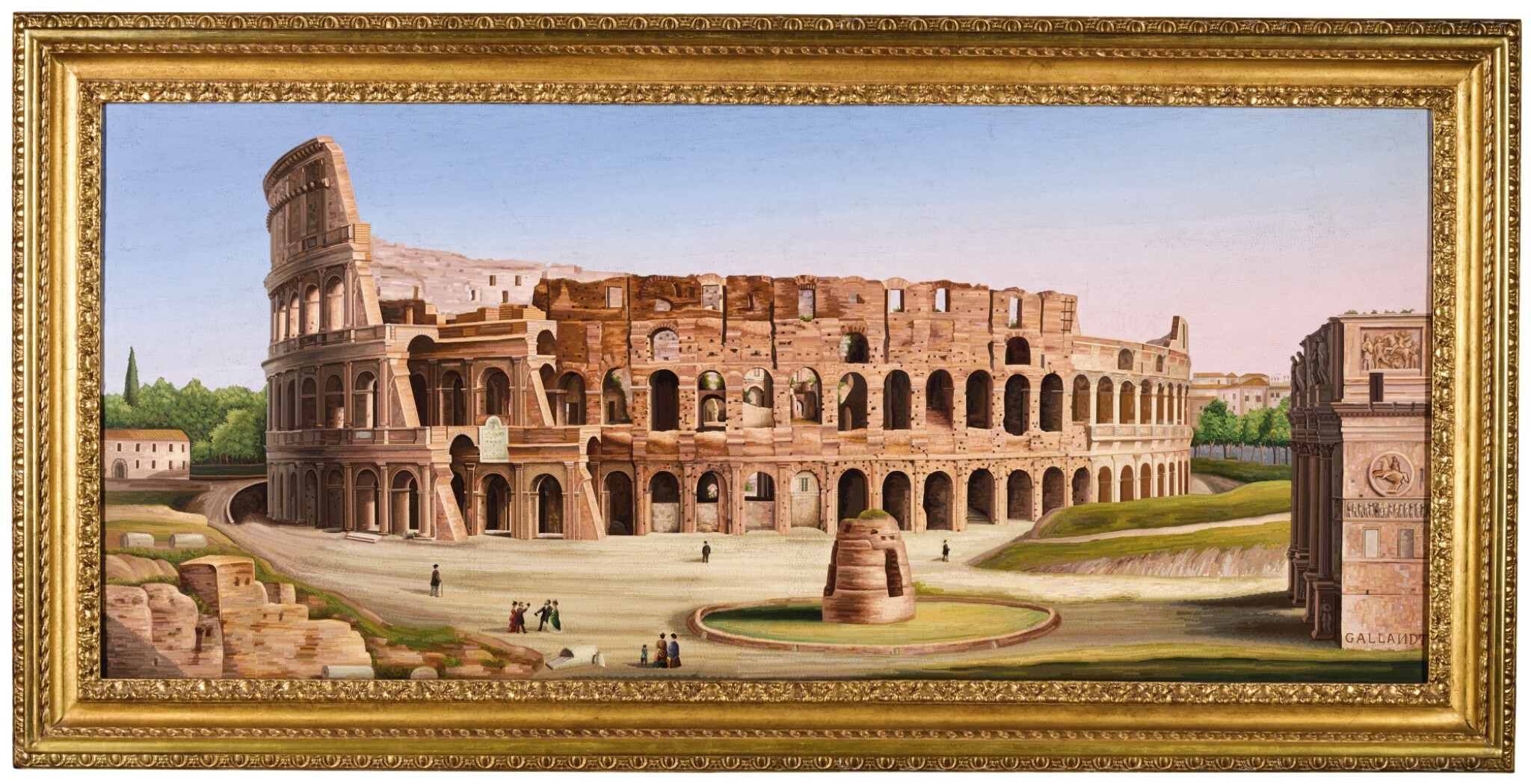 depicting the Colosseum, the Titus Fountain and the Arch of Constantine, with figures in the foreground, signed, within a gilt frame

In overall very good conserved condition. With very minor losses of tesserae to the edges as expected, but these are under the frame and not visible. There are some scratches namely to the right handside of the panel. There is a slight movement to the tesserae of the sky on the right handside which has been filled. There is also a minor filling to one window of the Colosseum. Signature to the lower right on the arch. The frame with an iron frame to the back for safe hanging. Back not inspected. A very striking and impressive panel.

The popularity of micromosaics depicting panoramic views of the Eternal city was extensively spearheaded by Grand Tourists of the 19th century who wished to bring back souvenirs, treasured tokens of their Roman pilgrimage. Nevertheless, the monumental scale and quality of the two following offered lots, achieved by one of the leading Italian mosaicists of the 19th century, surpass this concept and are works of art on their own right, illustrating the fascination to memorialize Antique monuments imbued with the grandeur of Rome. Gallandt’s “vedute” here create a readable landscape dedicated to increase the understandability of the monuments, thus focusing on the historicity of the Roman Forum and Colosseum.

A visit of the Colosseum, especially a moonlight tour of the monument, was a staple to any Grand Tour itinerary in Rome. “It is so huge that the mind cannot retain its image; one remembers it as smaller than it is, so that every time one returns to it, one is astounded by its size,” Goethe famously said about the Colosseum (J.W. Goethe, Italian Journey, trans. Thomas P. Saine, New York, 1989, p.129). Even the figures in the foreground of this panel seem to stop in awe in front of the scale and beauty of the building. Although Grand Tourists such as Horace Walpole dreamed to buy the Colosseum, they had to settle for taking as mementos masonry fragments of the building, prints, photographs and micromosaics depicting the monument.

Just east of the Roman Forum, the Colosseum also known as the Amphitheater of Flavius, was commissioned around 70-72 AD by Emperor Vespasian of the Flavian dynasty as a gift to the Roman people. Since it was built to keep the citizens occupied and entertained, to provide free admission and food at public expense, the opening of the Colosseum was followed by one hundred days of blood sport, including gladiatorial combats and wild animal fights. The final stages of construction of the Colosseum were completed under the reign of Titus’ brother and successor, Domitian. After four centuries of active use, the site fell into neglect, and up until the mid-18th century it was plundered for new building materials. Though two-thirds of the original Colosseum has been destroyed over time, the amphitheater remains the largest of around two hundred amphitheaters in the Roman Empire.

With the Titus fountain in front of it and the arch of Constantine on the right, it is the western side of the Colosseum that is featured on this micromosaic - the view Grand Tourists would have had of the monument when strolling down from the Roman Forum. This angle fittingly showcases both the whole and fragmented aspects of the Colosseum. In this way, Gallandt captures the ruinous and picturesque state of the monument, with little tufts of greenery growing on its façade, its grand massiveness in a vast and desolate setting, with the absence of surroundings and with the diminished presence of the city in the background. In their writings, visitors expressed their fondness for the monument and more specifically their fascination with the Colosseum’s ruins. The site bore a connection with time and the past. It acted as a mediator between man and nature and as a kind of memento mori: “The ruin is more gloriously beautiful; possibly more beautiful than when it was quite whole,” reminisces Hester Piozzi (Piozzi, “Observations and Reflections Made in the Course of a Journey through France, Italy and Germany” in Women’s Travel Writings in Italy, London, 2009, p.389).

While the production of micromosaics was largely monopolized by the Studio del Mosaico Vaticano, private micromosaic workshops flourished from the beginning of the 19th century in Rome. Conveniently settled in the center of the city near the Piazza di Spagna where most Grand Tourists lodged, Luigi A. Gallandt was active and highly successful from the mid-19th century through the 1880s. Gallandt was part of a prestigious group of Roman mosaicisti who had the privilege to be advertised in the Monaci guides in which Gallandt is featured in the 1874, 1881 and 1882 publications. In 1881, he advertises his studio as: ‘Manufacture of Mosaics, founded in 1850 by Chevalier L. Gallandt. Esteemed foreign visitors are invited to honour this establishment during their visit. In it they will find a great assortment of mosaics’. Since he earned the titled of Cavaliere (the equivalent of knighthood), Gallandt’s virtuosity was recognized and well established in Rome, which allowed him to produce large panels and smaller objects such as button studs for the most affluent visitors and aristocrats visiting the city. The mosaicist undoubtedly produced one of the most detailed micromosaics of the Roman forum and Colosseum.

Monumental micromosaic panels of this scale are rare and a definitive trophy in any collection of this field. A panel by Gallandt with a view of St. Peter’s Square was sold with Christie’s for £362,500 (The Exceptional Sale, London, 9 July 2015) and a View of the Forum by the same maker but of very slightly smaller size than the present lot was sold in New York by the same house (21 October 2015, lot 153 $149,000). A similar view of the Forum by Gallandt’s contemporary Roccheggiani – probably using the same painting for model – reached £337,250 (Christie’s London, 9 December 2010) whilst another monumental view by this maker of St Peter’s Square was sold for £481,250 (29 April 2010, lot 268). Another view of the Forum of the same scale, unsigned, sold Christie’s 29 November 2016, lot 397 (£131,000). Monumental micromosaic views of the Colosseum nevertheless have never appeared on the market.