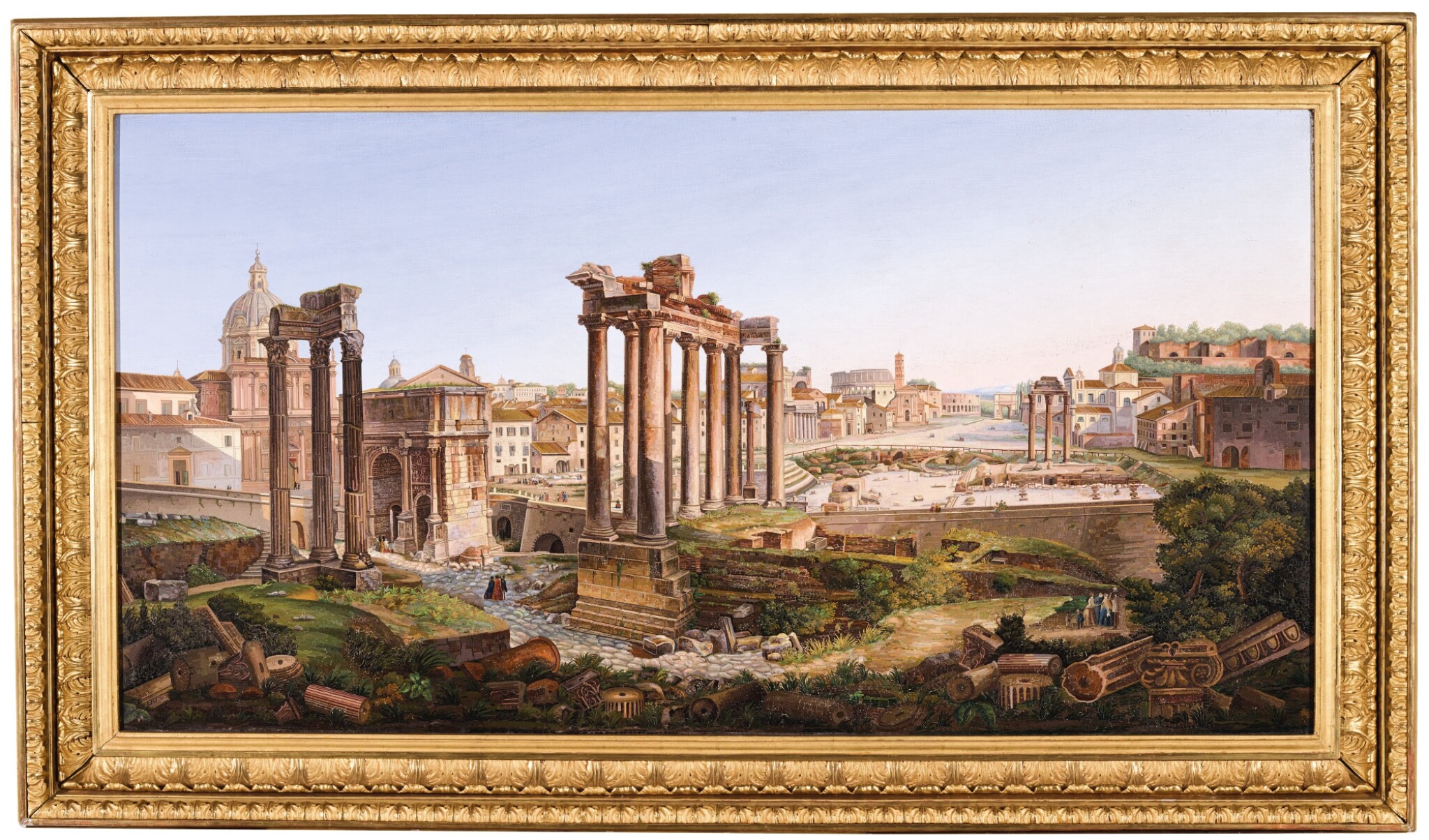 showing the Roman Forum, signed, within a rectangular gilt frame

This stunning panel is in overall good conserved condition. There is a movement to the sky surface on the left side, which has been conserved with minor filling. It is visible from a close up but not from a distance and it is not distracting. There is also a very slight movement to the upper right side of the panel, which as the previous, is a result of the structural frame to this heavy panel; this movement is barely visible. In the areas of vegetation, trees and bushes, the filling being of lighter colour can be noticeable. The back with an iron backing and the frame supported by iron rods and a steel bracket for safe hanging. This is an astonishing incredibly detailed panel.

NOTWITHSTANDING THIS REPORT OR ANY DISCUSSIONS CONCERNING A LOT, ALL LOTS ARE OFFERED AND SOLD AS IS" IN ACCORDANCE WITH THE CONDITIONS OF BUSINESS PRINTED

A. González-Palacios, and Steffi Röttgen with essays by Steffi Röttgen, Claudia Przyborowski; essays and new catalogue material translated by Alla Theodora Hall, The Art of Mosaics: Selections from the Gilbert Collection, Los Angeles, 1982, cat. no. 96, pp.198-199.

The popularity of micromosaics depicting panoramic views of the Eternal city was extensively spearheaded by Grand Tourists of the 19th century who wished to bring back souvenirs, treasured tokens of their Roman pilgrimage. Nevertheless, the monumental scale and quality of the two following offered lots, achieved by one of the leading Italian mosaicists of the 19th century, surpass this concept and are works of art on their own right, illustrating the fascination to memorialize Antique monuments imbued with the grandeur of Rome. Gallandt’s “vedute” here create a readable landscape dedicated to increase the understandability of the monuments, thus focusing on the historicity of the Roman Forum and Colosseum.

“I stood in the Roman Forum! - Amidst its silence and desertion, how forcibly did the memory of ages that were fled speak to the soul! How did every broken pillar and fallen capital tell of former greatness,” wrote Charlotte Eaton (Eaton, Rome, in the Nineteenth Century, Vol.1, p.77). Echoed in other 19th century observations of Grand Tourists, the panel depicting the Roman Forum precisely captures Eaton’s memory.

The Roman Forum, also known as Campo Vaccino, was a site located at the center of the ancient city of Rome and became the religious, social, economic, legal, and political hub of the Roman Empire. Between the Palatine Hill and Capitoline Hill, the Forum became the home to many of the Eternal city’s most impressive temples and monuments, which still today attract many visitors. At first, it essentially served as a marketplace for day-to-day shopping. Over time, it became much more versatile and functional, as public affairs were held in the area. When the Roman Republic came to be in 509 BC, the area retained its public use, and was where processions and elections took place, and eventually where the Roman Senate gathered.

Just like the view of the following lot depicting the Colosseum, the present panel is most likely based on a print, publication or drawing of the time. With neat greenery acting as a key element enhancing the micromosaic’s picturesque aesthetic, Gallandt presents the Roman Forum as clear as possible, devoid of its filth and piles of dirt. The view he chooses is taken from the Campidoglio looking south towards the Colosseum. From left to right, there are: the Baroque church of S.S. Martina e Luca, the Temple of Emperor Vespasian (79-87 AD), the Arch of Septinius (203 AD), the Temple of Saturn (497 BC), the column of Phocas (608 AD), the Colosseum, the Church of S. Francesco Romano, the Arch of Titus (81 AD), the large basin for the cattle market in front of the three columns of the Temple of Castor and Pollux (495 BC), the Church of Santa Maria Antiqua and the Caelian Hill.

While the production of micromosaics was largely monopolized by the Studio del Mosaico Vaticano, private micromosaic workshops flourished from the beginning of the 19th century in Rome. Conveniently settled in the center of the city near the Piazza di Spagna where most Grand Tourists lodged, Luigi A. Gallandt was active and highly successful from the mid-19th century through the 1880s. Gallandt was part of a prestigious group of Roman mosaicisti who had the privilege to be advertised in the Monaci guides in which Gallandt is featured in the 1874, 1881 and 1882 publications. In 1881, he advertises his studio as: ‘Manufacture of Mosaics, founded in 1850 by Chevalier L. Gallandt. Esteemed foreign visitors are invited to honour this establishment during their visit. In it they will find a great assortment of mosaics’. Since he earned the titled of Cavaliere (the equivalent of knighthood), Gallandt’s virtuosity was recognized and well established in Rome, which allowed him to produce large panels and smaller objects such as button studs for the most affluent visitors and aristocrats visiting the city. The mosaicist undoubtedly produced one of the most detailed micromosaics of the Roman forum and Colosseum.

Monumental micromosaic panels of this scale are rare and a definitive trophy in any collection of this field. A panel by Gallandt with a view of St. Peter’s Square was sold with Christie’s for £362,500 (The Exceptional Sale, London, 9 July 2015) and a View of the Forum by the same maker but of very slightly smaller size than the present lot was sold in New York by the same house (21 October 2015, lot 153 $149,000). A similar view of the Forum by Gallandt’s contemporary Roccheggiani – probably using the same painting for model – reached £337,250 (Christie’s London, 9 December 2010) whilst another monumental view by this maker of St Peter’s Square was sold for £481,250 (29 April 2010, lot 268). Another view of the Forum of the same scale, unsigned, sold Christie’s 29 November 2016, lot 397 (£131,000). Monumental micromosaic views of the Colosseum nevertheless have never appeared on the market.