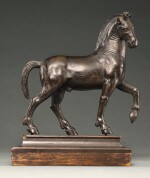 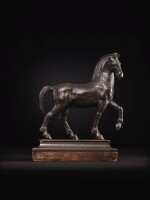 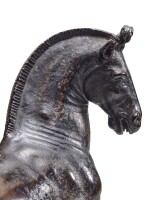 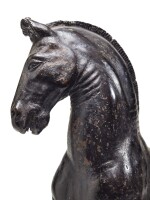 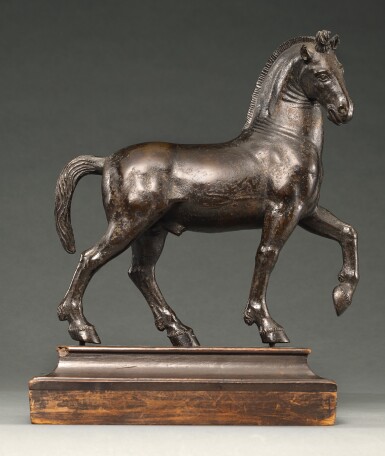 ITALIAN, PROBABLY PADUA, FIRST HALF 16TH CENTURY AFTER THE ANTIQUE

Overall the condition of the bronze is very good with minor dirt and wear to the surface consistent with age. There are at least two layers of old lacquers to the surface of the bronze. The upper layer is darker and is flaking in some areas, including at the rump and base of the tail. The details are finely cast and are general well preserved. There are some minor nicks including to the edges of the hooves. There is an original hole to the underside between the front legs (the investment would have been removed from this hole during the casting process). There are a few original minor lacunae around the scrotum. There are a few further minor original casting flaws, including a small lacuna to the haunches.There are bronze dowels underneath three of the hooves for mounting (it is difficult to determine their date). The undersides of these hooves are left rough, whereas the raised hoof has anatomical detail to the underside.

‘Spetchley Park -I. Worcestershire, The Seat of Mr. R. V. Berkeley', Country Life, 8 July 1916, p. 47, illustrated in the Staircase Hall. Country Life write refers to the present work and other bronzes offered in this sale as follows 'Below the gallery, the illustration reveals several other of Mr and Mrs Berkeley's choice acquisitions. On a quite unusually good Swiss buffet are several Italian bronzes of the best period of her renaissance'.

Inventory, 1949, 'A bronze model of a horse' in the Morning Room

This rare and finely cast bronze reproduces the horse on the far right side of the famous Quadriga on the façade of Saint Mark’s Cathedral in Venice. Dated to the 2nd or 3rd century AD, the monumental quartet of bronze horses was shipped to Venice in 1204 following the sack of Constantinople and placed in front of the cathedral as a symbol of Venetian power. In the Renaissance, the Horses of San Marco served as inspiration for Venetian and Paduan bronze sculptors, who looked to antiquity to create covetable statuettes for a learned clientele. Small bronzes representing horses attained such popularity in the 16th century that the humanist Sabba de Castiglione commented on the perceived absurdity of their status as collector's items: 'And [what] about that other one who goes on foot so as not to have to spend ten ducats on a horse and then goes and pays out 500 ducats for a little antique horse of a bronze, the height of a palm, which not only will not carry you but needs itself to be carried round' (as quoted in Warren, op. cit., pp. 99-100).

The present bronze is near-identical to a number of surviving 16th-century bronze horses which are surmounted by a warrior. These include examples in the Metropolitan Museum of Art (inv. no. 1975.1.1.1391), the Frick Collection, New York (inv. no. 16.2.23), and one formerly in the Beit Collection (London 2007, op. cit.), which differs from the previous two in that its rider is a copy of Andrea Riccio’s influential Shouting Horseman in the V&A (inv. no. A.88:1, 2-1910). While the Frick bronze depicts the horse with a collar (as in the antique models) and bridle, the Beit and Metropolitan horses, like the present cast, are free from accoutrements. The warrior represented in the Frick and Metropolitan examples – and by extension the horse – has tentatively been attributed to Desiderio da Firenze, a Paduan bronze founder whose output took inspiration from Riccio as well as antique models. The horse and rider in the Metropolitan Museum have therefore most recently been dated to around 1540 (see Scholten, op. cit.). It is this horse, together with the Beit beast, which compares most closely to the present cast in overall composition and details such as the creases of the turned neck, the veining to the lower stomach, and the shape of the tail. There is, however, some uncertainty as to whether the horse and rider in the above examples were originally conceived together; not only do the separately-cast riders appear disproportionately small, several warriors of the 'Desiderio' type are mounted on horses that vary considerably from the present model (for instance the cast from the Untermeyer Collection, see Frankfurt, op. cit., p. 385, fig. 195).

Lacking any mount holes for a rider, the present bronze was clearly conceived as an individual figure. Another such cast reproducing the same model is in the Bargello Museum, Florence (inv. no. 350), there catalogued as Paduan, late 15th century. A smaller bronze copy of the far-left San Marco Horse in the Ashmolean Museum, Oxford (inv. no. WA 1855.1) is stylistically similar to the present model and shares the circular cavity on the underside of its belly, through which the clay core was extracted – according to Warren (op. cit., p. 100), a characteristic feature of early 16th-century Paduan and Venetian bronzes.