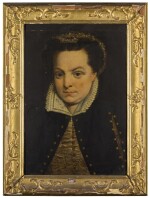 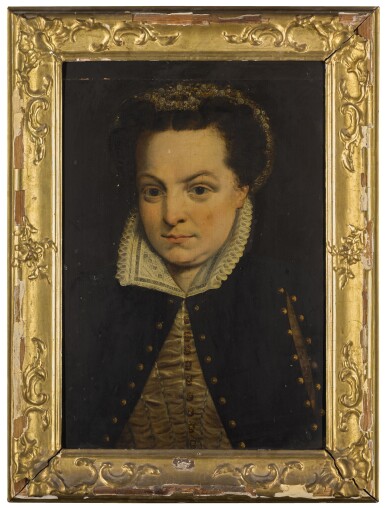 ATTRIBUTED TO WILLEM KEY | Portrait of Margaret, Duchess of Parma and Governor of the Netherlands (1522-1586), bust length

ATTRIBUTED TO WILLEM KEY | Portrait of Margaret, Duchess of Parma and Governor of the Netherlands (1522-1586), bust length

Portrait of Margaret, Duchess of Parma and Governor of the Netherlands (1522-1586), bust length

indistinctly inscribed on an old label, verso: Margaret natural daughter / of Emperor Charles the 5th / Widow of Octavius first / Duke of Parma, and / Governor elect of the Low / Countries 1559 / bought in the sale of the Hirs Tagel 1813; and stamped with two red wax seals

The panel is uncradled, flat and stable. On the reverse a horizontal addition is visible along the upper margin (5 cm. wide), and a horizontal split running the width of the panel is visible from the front (2 cm. wide), along which there are some small paint losses. The paint surface is otherwise very dirty with a discoloured varnish. There is slight lifting of the paint surface in a spot in her cheek, and some small losses are scattered in the background to her left, and in the lower right corner. Small, discoloured retouchings to previous losses are visible scattered throughout, most notably to an area in her right shoulder (1 x 1 cm.). Inspection under ultraviolet light is impeded by the old, milky varnish but confirms the retouchings visible to the naked eye, including some vertical, fine lines scattered particularly through the left side of her face along the wood grain. In overall fair condition.

Hendrik, Baron Fagel (1765-1838), Secretary of State to the States General of the Netherlands and Ambassador to England;

By descent to his son, Richard Temple-Nugent-Brydges-Chandos-Grenville, 2nd Duke of Buckingham and Chandos (1797-1861), Stowe House, Buckinghamshire;

Inventory, 1949, in the Principal Corridor

We are grateful to Professor Koenraad Jonckheere for tentatively suggesting an attribution to Willem Key on the basis of photographs. Two untraced portraits of Margaret of Parma by Key are recorded: one in the inventory of Leonora van Someren, dated 14 September 1649; and the other in the Dordrecht City Archives, in the inventory of Maria van Roomerswael, dated 2 April 1674 (see K. Jonckheere, Willem Key. Portrait of a humanist painter, Turnhout 2011, p. 213, nos. C.16 & C.17).

Margaret of Parma was the illegitimate daughter of Emperor Charles V and his mistress Johanna Maria van der Gheynst. In 1527, at the age of five, she was betrothed to Alessandro de' Medici, Duke of Florence, the nephew of Pope Clement VII, who she finally married in 1536. The following year, however, her husband was assassinated, and in 1538, at the age of just 15, she married her second husband, Ottavio Farnese, Duke of Parma, the grandson of Pope Paul III. Though the marriage was not a happy one, it afforded her a position of significant power in the political rivalries between the Papal States and the Holly Roman Empire. Highly cultured and extremely well educated for a woman of her time, in 1555 she left Italy for the Netherlands where her half-bother, Philip II of Spain, appointed her Governor, a position she held from 1559 to 1567 and again from 1578 to 1582. ATTRIBUTED TO WILLEM KEY | Portrait of Margaret, Duchess of Parma and Governor of the Netherlands (1522-1586), bust length
Lot Closed
Lot 104