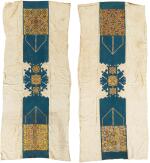 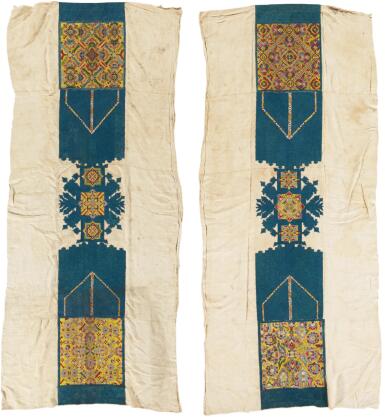 worked in polychrome silk embroidery on linen, in blue/green and panels of various colours against a yellow ground, of geometric design and repeat pattern, with a star motif at the centre, each panel of different pattern

This rare pair of Moroccan embroideries were made in the town of Chechaouen, (sometimes referred to as Chaouen or Chefchaouen), northwest of Fez. Muslim and Jewish refugees fleeing southern Spain after the fall of Granada in 1492, settled in Fez, Chaouen and Tetouan, all towns now renowned for their early embroideries, which synthesised elements from the traditions of Spain, the Ottomans, Europe and the Maghrebi. Embroideries were used to decorate the home on special occasions; hanging such as these were used to adorn entrance-ways, windows or as mirror covers.