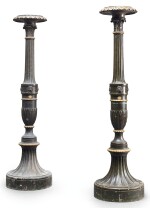 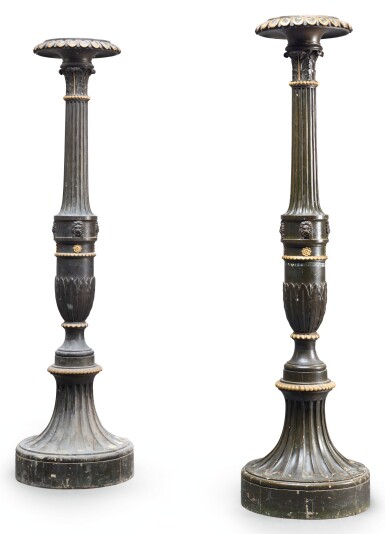 with dished gadrooned circular tops, one with losses to base

This impressive pair are in unrestored Country House condition. Losses to paint work, some re-touching. Chips to gesso. Fragmenting and age cracks to base. Losses to blocked base elements and these will need replacing. Evidence of old worm. These were in store at Spetchley for a very long time and it shows.

One about 2cm taller than the other.

Inventory, 1893, ‘A pair […] carved black and gilt stands’ on the Grand Staircase

These impressive torchères are a romantic derivative of antique 'Roman' forms and there are a number of designs which relate by George Smith and others (see Edward Joy, Pictorial Dictionary of British 19th Century Design, Woodbridge, 1977, p.553).

For a pair of ebonised and parcel-gilt 'stands', which are also boldly carved, see those after a design by Thomas Hope, the great Regency designer and patron (illustrated, David Watkin and Philip Hewat-Jaboor, Thomas Hope, Regency Designer, London, 2008, p.414). Also see a 'bronzed' tripod table of highly stylised neo-classical form by George Oakley with similarly applied neo-classical motifs taken from moulds which was sold Sotheby's London, Two Great Scottish Collections, 28 March 2017, lot 131. This table was acquired by Sir William Forbes Bt. (1773-1828) in 1818. The present lot may well date from around the same time, possibly a little later, after Robert Berkeley had returned from his Grand Tour in 1818 and circa 1821 when Spetchley was completed.

The bronzed surface and gilt-heightened detail of these torchères is also a treatment favoured by Smith and exemplifies a Regency delight in unusual paint techniques and texture. We see these bronzed finishes evidenced in hand-coloured plates from Smith's book, A Collection of Designs for Household Furniture and Interior Decoration in 1808.