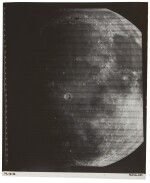 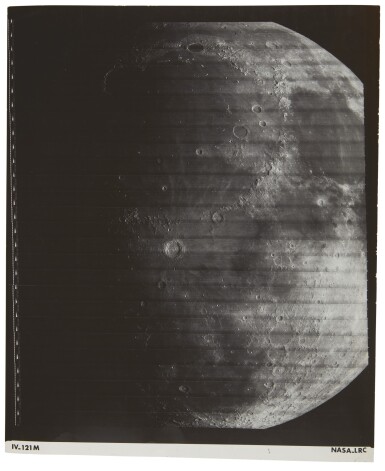 NEARSIDE OF THE MOON WITH CRATER COPERNICUS IN THE OCEANUS PROCELLARUM, THE "SEETHING BAY" (SINUS AESTUUM), AND VARIOUS LUNAR SEAS, TAKEN 11-26 MAY, 1967.

A striking image of the near-full lunar disc, the left side of the image shrouded in darkness, the right reflecting the sunlight, with famous Crater Copernicus near the center of the image, in the eastern portion of the vast Oceanus Procellarum, surrounded by the Vaporum, Serenetatis, Imbrium, Nubium, and Cognitum seas.

Lunar Orbiter IV flew in high altitude polar orbits with the primary objective of mapping the near side of the Moon in high resolution, with 100% of the nearside being photographed, and 95% of the farside. A 40 by 45 foot mosaic was created at NASA's Langley Research Center using the images taken by the Lunar Orbiter IV, and visitors were allowed to stand or crawl over it. The mosaic was used to determine the sites to be photographed in higher resolution by the Lunar Orbiter V.