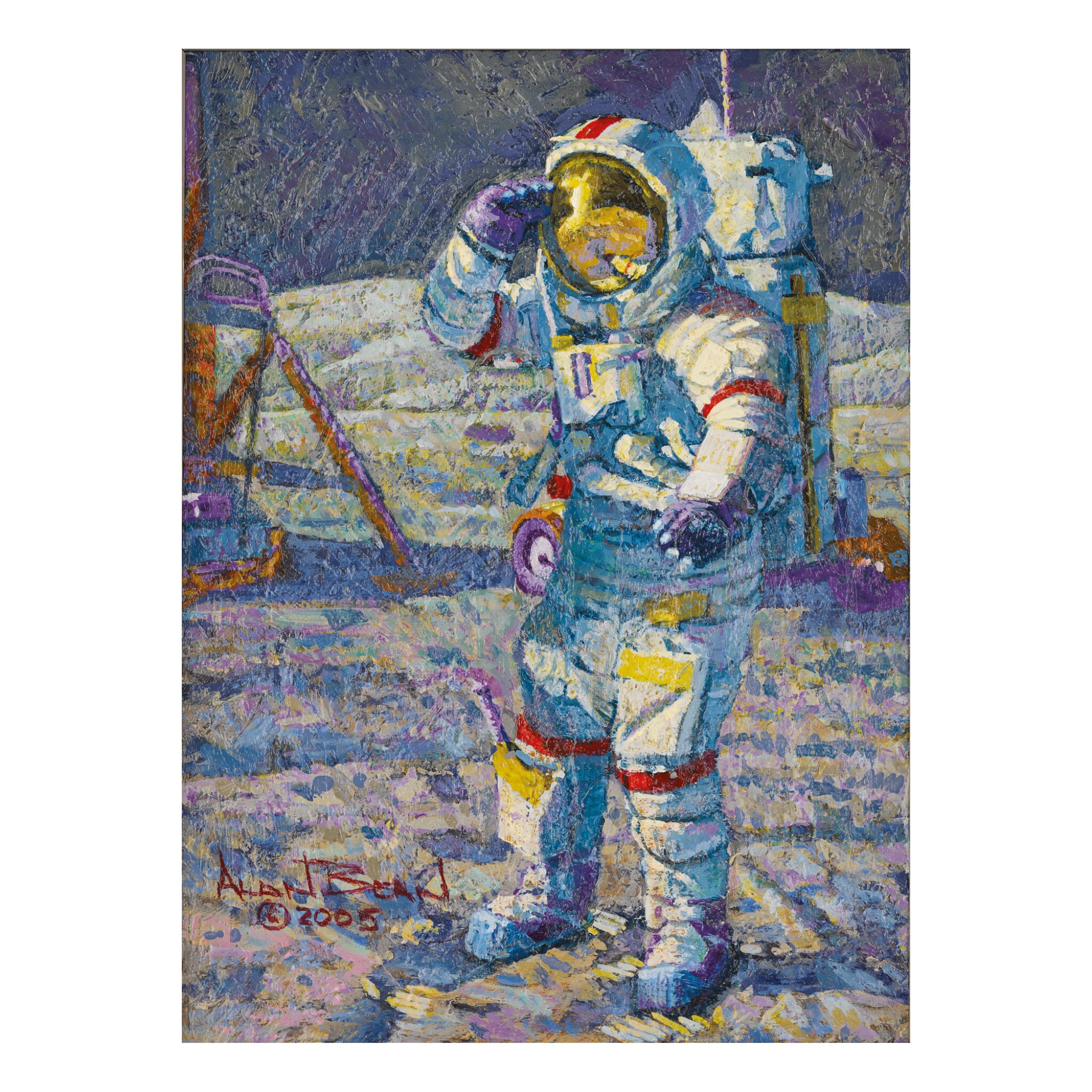 Acrylic over texturized modeling medium on aircraft plywood, 12 1/16 by 8 13/16 inches, signed "ALAN BEAN © 2005" lower left. Modeling medium texturized with a moon boot and Bean's flown geology hammer, with tiny FLOWN bits of the Apollo 12 spacecraft (heatshield and gold kapton foil) and small piece of one of Bean's FLOWN emblems embedded with traces of moondust mixed into the medium. Framed to 13 3/8 by 10 1/4 inches, descriptive label from Al Bean's studio affixed to frame verso.

When Alan LaVern Bean (1932-2018) passed away in 2018 at the age of 86, he was remembered primarily for his part in the Apollo 12 mission, when he became the fourth person to set foot on the moon, just four months after Neil Armstrong and Buzz Aldrin became the first moonwalkers. However, when the astronaut left NASA in 1981 he undertook a major life change and began to pursue painting full time (to the surprise of his astronaut peers). He would later go on to say “I think of myself not as an astronaut who paints, but as an artist who was once an astronaut.”

Bean's unique artistic process is a direct reflection of his dual identity as an artist and an astronaut. He would prepare his canvas by covering a piece of aircraft plywood with a thick acrylic modeling medium, then texturize the surface of his canvas using a replica of the soles of his lunar boots, and the actual FLOWN metal geology hammer that accompanied him to the lunar surface on Apollo 12 ("these tools, which once helped me explore the moon, are now putting the moon's stamp on my paintings.") In his later paintings, he would also incorporate three additional elements into the modeling medium: FLOWN pieces of heat shield and gold Kapton foil from the Apollo 12 spacecraft, and a small piece of one of Bean's flown emblems embedded with traces of moondust.

This painting of an astronaut saluting on the lunar surface takes its inspiration from the final mission of NASA's Apollo program — Apollo 17. Bean cites a quote from Commander Gene Cernan, who wrote following the successful conclusion of the mission: "To everyone who helped put American astronauts on the moon, wherever you are today, I salute you."