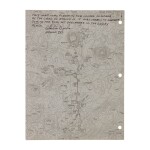 During their 71 hours on the Moon, Lunar Module Pilot Charlie Duke, and Mission Commander John Young conducted three EVAs (Extra-Vehicular Activity, or Moonwalks), spending just over 20 hours on the lunar surface. The EVAs included three traverses in the lunar rover, during which they deployed 9 different experiments, photographed the lunar surface, and collected lunar samples from 11 different sites. This map accompanied them on the Lunar Rover, and was to be used as their primary navigation instrument should the Lunar Rover become inoperative.

Charles Duke's provenance letter reads: "This map of the lunar surface marked Descartes Walking traverses-I, II, III that I have presented to you was carried to the moon as part of the Apollo 16 checklist and data package. The entire package was stowed, initially, in the Command Module "Casper". Then once in lunar orbit, I transferred the package to its stowage compartment in the Lunar Module "Orion." As I descended the ladder to the lunar surface for our first EVA, this map and others plus cameras and film were carried by me for stowage on the Lunar Rover. These maps were to be used by me and John Young to navigate to our objectives during our lunar stay. This map was to be our primary navigation instrument in the event the lunar rover was inoperative. It was stowed with the other traverse maps on a special clip on the side of the rover instrument panel. Since returning the map from the Moon, it has been in my possession. Be a good caretaker. Keep the map as a remembrance of the Apollo Era. May it serve as a symbol to remind future generations that, God willing, there is no goal or dream that is impossible to achieve or as Rene Descartes says "There is nothing to far removed from us that we cannot reach it, or so hidden that we cannot discover it."