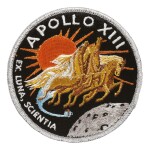 FLOWN embroidered mission patch, 4 inches in diameter, featuring the mission insignia with three horses traveling from the Earth to the Moon with the Sun in the background. “Ex Luna, Scientia” is Latin for “From the Moon, Knowledge.” SIGNED by JAMES LOVELL on the reverse in black marker. With a Typed Letter Signed by JAMES LOVELL on Lovell Communications letterhead.

Jim Lovell's letter of provenance reads: "I certify that this Apollo 13 Embroidered Mission Patch was on board the Apollo 13 spacecraft. Apollo 13['s] perilous flight took off on April 11 and returned safely on April 17, 1970. This patch is from my personal collection of space artifacts and has been in my possession since the mission."