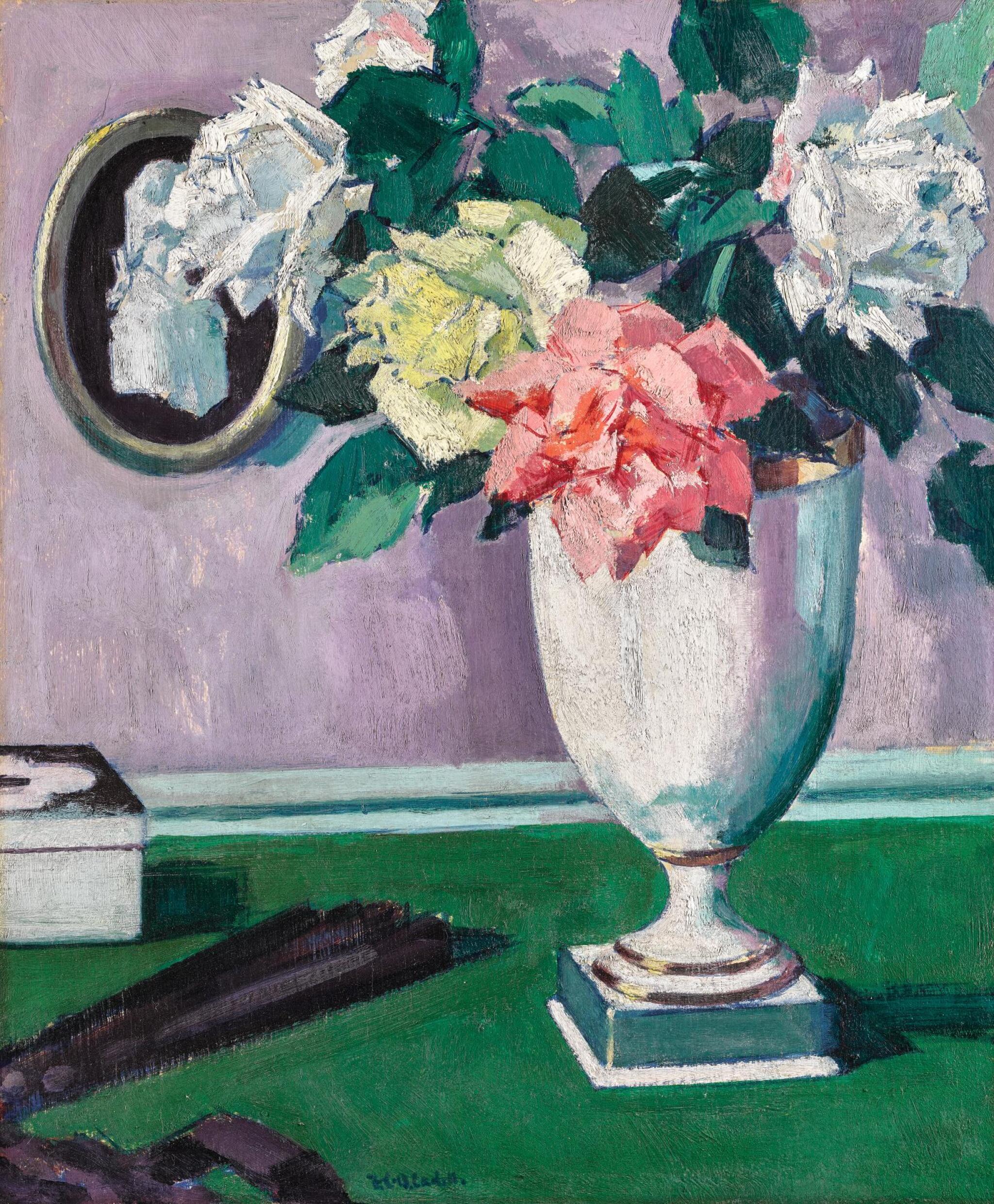 signed l.c.: F.C.B. Cadell; signed and inscribed on the reverse

The board is in good stable order and is providing a sound support. The work is in excellent overall condition.

Examination under ultraviolet light reveals some possible minor retouchings to the pink background in the centre left of the composition.

Held in a gilt frame and cloth slip. Under glass.

Aitken Dott & Son, Edinburgh; where purchased by Sir Alexander and Lady Gibson in May 1978 and thence by descent

Roses is one of several still-life paintings that demonstrate Francis Campbell Boileau Cadell’s transition to a bolder style, which developed after his service in the First World War. In 1920, Cadell established a new studio at 6 Ainslie Place, Edinburgh, which he stylishly decorated with an Art Deco feel: ‘He used the drawing room as his studio, and painted the walls in a rich mauve colour in sharp contrast to the brilliant white-painted woodwork of the panelled, inter-connecting doors. The highly polished dark wooden floor reflected the bright colours of the carefully placed Whytock and Reid furniture and provided the theme for many of his dramatic interiors.’ (T. Hewlett, Cadell: A Scottish Colourist, 1988, p.54). The present painting is clearly set in this new studio, with the vibrant colour of roses and the mauve walls juxtaposed with the black and white of the vase, fan and the cameo. The use of black suggests the influence of Édouard Manet, whose work Cadell encountered while studying at the Académie Julien in Paris between 1899 and 1902.

Despite echoes of Manet’s influence, Roses varies markedly from Cadell’s impressionistic earlier works, such as Reflection from 1915 (sold in these rooms, 12 June 2018, Lot 119), which exhibits far looser brushwork and a muted palette. The present lot marks a shift towards maximising colour and minimising handling, and fellow Scottish Colourist Samuel John Peploe can be credited with the development of stronger colour and tighter compositions in Cadell’s still-lifes. Though he studied in Paris, Cadell spent less time in France than the other three Colourists, instead becoming acquainted with new developments of the French Avant-Garde indirectly through Peploe and his works. In paintings such as Roses, Cadell fuses the influence of French Post-Impressionism and the elegance and sophistication of Art Deco with elements of Orientalism, alluded to by the inclusion of the black fan.

Cadell painted many still-lifes and interior views of his studio at Ainslie Place, and roses were a commonly recurring subject. The subject, composition and palette of the present work bears similarities to several other paintings, particularly another titled Roses (sold in these rooms, 14 April 2003, Lot 109), in which the right of the picture is similarly dominated by a vase of roses against a mauve wall, with a selection of objects to the lower left. The vase in the present painting is also the feature of The Wedgwood Vase, painted in 1929, showing that Cadell often used the same objects in diverse ways to create dynamic compositions.