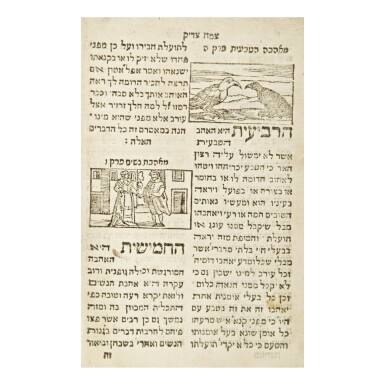 A rare copy of a charmingly-illustrated ethical treatise.

Tsemah tsaddik is a translation of the extremely popular Italian book of ethical parables Fiore di Virtù (Flower of Virtue) into Hebrew by Rabbi Leon Modena (1571-1648). The Hebrew title, meaning “A True Branch” (see Jer. 23:5), alludes to the work’s inherent value, despite its overtly secular contents. Modena’s name does not appear explicitly in the book, consistent with its anonymous nature. Nevertheless, an allusion in the initial words of the introduction (f. 3r) and acrostics in the first words of chapter 1 (f. 4r) and last words of the book (f. 40r) make his authorship certain. Modena adapted the text from the standard Italian, taking care, however, to modify any references to Christian Scripture or saints by substituting sayings of the rabbis from the Talmud and midrashim.

The text is accompanied by thirty-eight different woodcuts, illustrative of exempla of dozens of virtues and vices, usually arranged in pairs, such as Love and Jealousy, Cruelty and Kindness, and Humility and Pride. The handsome pictures themselves include depictions of various types of animals, birds, and people, including even mythical creatures, such as mermaids (f. 19r) and devils (f. 23r). These are augmented by imagery from both biblical and rabbinic literature, for example, the flaying of Rabbi Akiva (f. 5r; see Berakhot 61b) and the embrace of David and Jonathan (f. 6r; see I Sam. 20:41).

The book’s publication was sponsored by Solomon Hayyim and his son Abraham Haver Tov and dedicated to a young member of the Calimani family, Jonathan Simhah ben Abraham. Although the exact reason for the dedication remains obscure, Modena is known to have composed poems on numerous occasions, both happy and sad, for members of the Calimani family. In 1610, he wrote a poem which was inscribed on the tombstone of three-year-old Abraham Calimani, infant son of the young man to whom this book was dedicated.