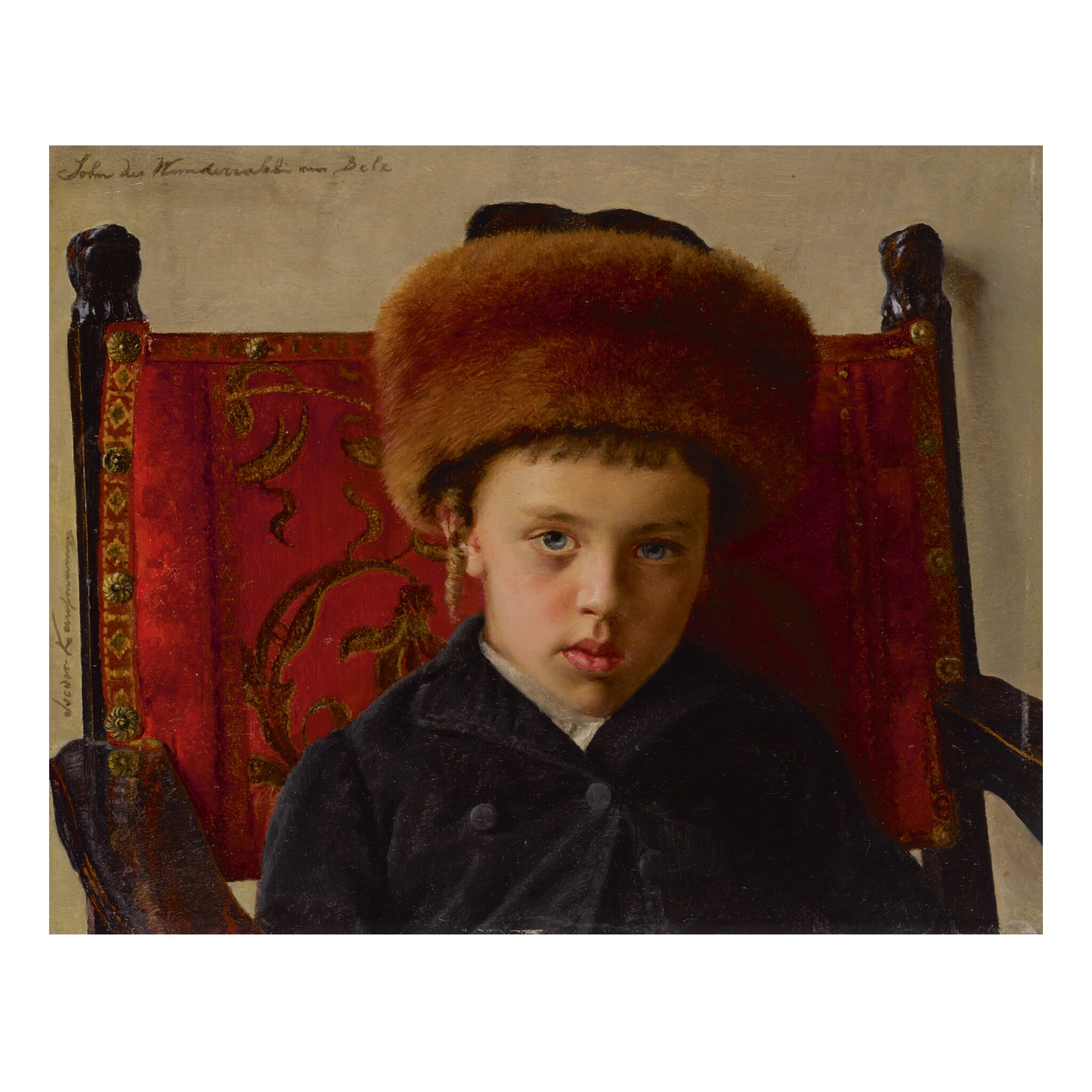 THE SON OF THE MIRACLE-WORKING RABBI OF BELZ

This work is painted on a mahogany panel. The panel is flat. The paint layer is stable and seems to have been cleaned and restored. The varnish is slightly uneven. The paint layer is in beautiful condition. No damages or restorations are visible to the naked eye. Under ultraviolet light, the varnishes on the surface read slightly unevenly. There is a horizontal line beneath the chin in the black coat which shows darkly under ultraviolet light and other areas that read unevenly, but these do not correspond to retouches. The varnish could be addressed, but the work could also be hung as is.

Please note that there is updated provenance and literature references for this work.

Acquired by the present owner in 1985

This magnificent painting of the young son of the Belzer Rebbe has become an icon of the work of Isidor Kaufmann, who is justly considered the greatest Jewish painter of the 19th Century. As much as he is beloved for his portraits of elderly Jewish sages, which exude dignity and stature, so too is he revered for his ability to portray young children, upon whose shoulders rest the hopes and dreams of their parents and the entire Jewish community. This particular child is one of the youngest ever portrayed by Kaufmann, and his innocence and radiance are without parallel. The uniqueness of this work is also emphasized by the fact that the artist titled the painting in his own hand in the upper left: Sohn der Wunderrabbi von Belz.

The stature of this work was confirmed when the painting was chosen for the cover of the important exhibition catalogue Rabbiner, Bocher, Talmudschüller, Bilder des Weiner Malers Isidor Kaufmann 1853-1921, edited by G. Tobias Natter in 1995. This choice came as a delightful surprise to the current owners, who had agreed to loan the work to the exhibition at the Vienna Jewish Museum, but did not know it would be selected for the catalogue cover.

Kaufmann’s practice as an artist entailed arduous summer travel through the small towns of Galicia and Eastern Russia, the land he called his “Promised Land”. While visiting the small shtetels and synagogues of towns such as Holleschau, Jablonow and Brody, he made numerous studies on site which he later worked up into highly detailed and refined paintings in his studio during the winter months in Vienna. His painstaking technique resulted in paintings that stand at the pinnacle of 19th century portraiture.

During his travels, Kaufmann encountered itinerant “miracle-working” Rabbis whom he described in a vivid letter written from Jablonow on June 20, 1897:

“I had the opportunity to spend a Sabbath Evening in the company of a travelling rabbi. It was incredible! You know what a travelling rabbi is? This is a man who has so and so many famous ancestors, who is endowed with a naïve but terrible impertinence, a lot of Talmudic knowledge, great, honest piety (rhetorical in the presence of listeners) and an open (taking) hand. This is what is called a travelling rabbi!” (quoted in Natter, op. cit., p. 230)

Kaufmann is known to have painted at least one other portrait of such a Rabbi's son, the Son of the Miracle-Working Rabbi of Nadorna. According to the artist's own words, he met the miracle-working Rabbi of Nadorna during a study trip in the summer of 1897 (Natter, op. cit., p. 357, illustrated). The present portrait was painted during one of Kaufmann's trips to Galicia. Natter describes the boy as follows:

“It shows a small boy with streimel and temple locks sitting on a giant carved chair upholstered with a velvet material with a red and black pattern. The boy looks at the observer with very earnest, piercing eyes, as if he were already aware of the heritage awaiting him” (Natter, op. cit., p. 230).