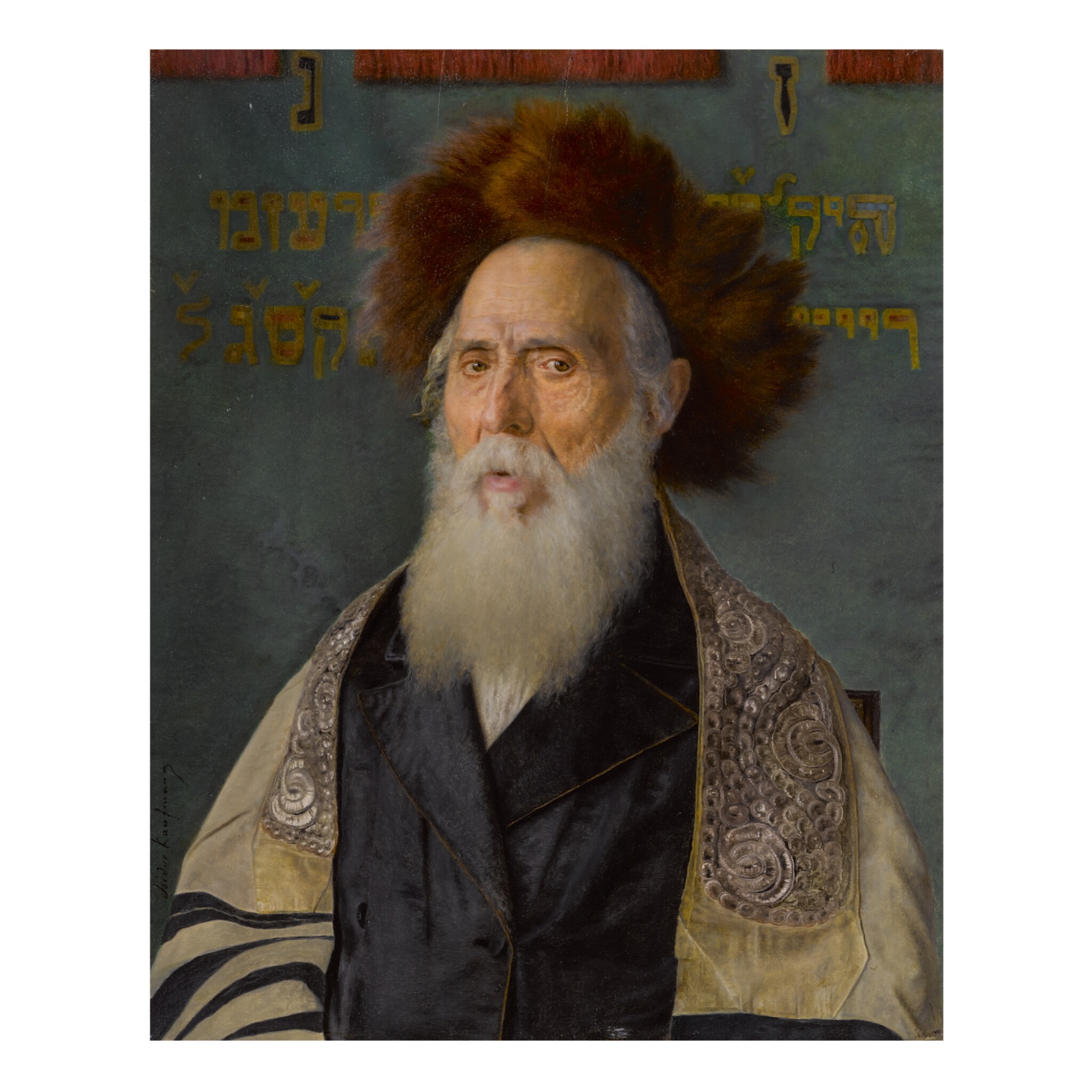 PORTRAIT OF A RABBI

This work on a single piece of mahogany panel is in good condition. The panel has become distorted in the lower left corner and is concave by about half an inch. There are two cracks in the panel in the upper center--one running through the top of the hat but not into the forehead, and the other running through the green wall but not entering the hat. There are retouches to both of these thin cracks. There is a very thin retouched diagonal scratch in the paint layer beginning in the hat in the upper center running through the hat on the right side, which does not interfere with the head at all. Much of the color in the beard, around the eyes, in some of the greys of the robe and in some of the ornamentation in the shtreimel is very fluorescent under ultraviolet light, but there do not appear to be any other restorations. The work should be hung as is.

Please note there is updated provenance for this work. Religious Institution, and sold: Sotheby's, New York, April 25, 2006, lot 101, illustrated Acquired at the above sale

This dignified Portrait of a Rabbi shows Kaufmann at the height of his powers.

With his slightly parted lips and direct gaze, the sitter seems about to speak. Wisdom and solemnity are exemplified in his delicately rendered face and in his direct gaze. He embodies the nobility of the elderly Jewish sage, devoted to the Torah and a Jewish way of life that was fast disappearing from the villages of Eastern Europe and Russia to which Kaufmann travelled each summer in the early 1900s.

The artist's striking portraits of these rabbinical sages are enhanced through Kaufmann's trademark use of ornamental background detail and a sumptuous palette. In this portrait, Kaufmann lavishes equal care on the clothing and background as he accords to the Rabbi’s face. He wears an imposing streimel, painted in tones of brown and mauve, and sits before a magnificent green and red Torah Ark curtain, typically inscribed with dedicatory text. His dark jacket contrasts with the tallit and splendid atara, shimmering with silver and gold thread.

Kaufmann’s place in the history of celebrated Viennese portraiture was recognized by his inclusion in a landmark exhibition Facing the Modern: The Portrait in Vienna 1900 at the National Gallery, London (October 2013–January 2014).