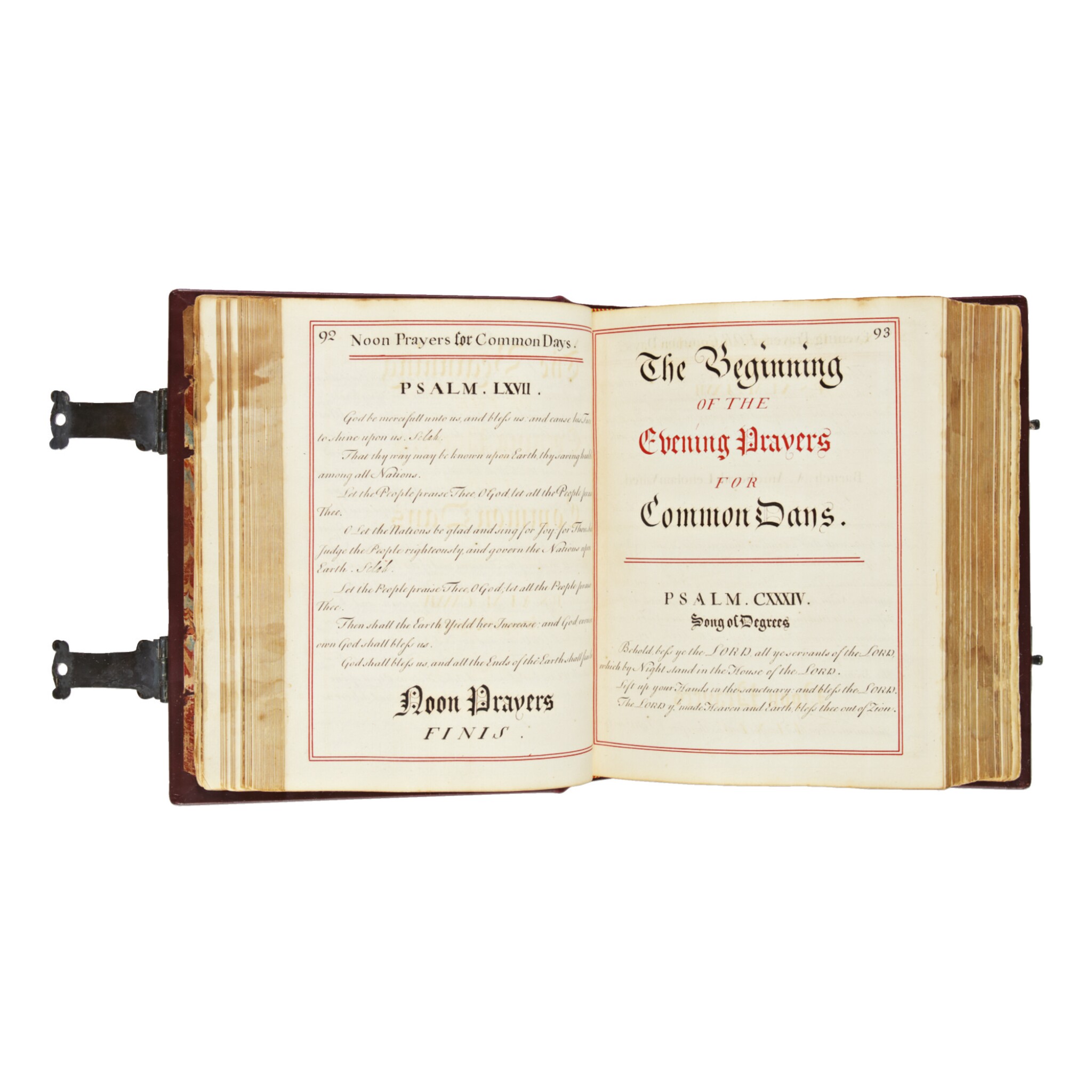 One of a small group of manuscripts representing the earliest known translation of the Sephardic siddur into English.

The present lot is a remarkable document that tells a rich and complex tale of linguistic assimilation, religious devotion, and communal censorship. The story begins with the expulsion of the Jews from England under Edward I in 1290 and their unofficial resettlement there in the mid-seventeenth century. In 1664, ex-conversos and Sephardic Jews from the Canary Islands, Amsterdam, the Iberian Peninsula, and elsewhere ratified a set of bylaws that served as the governing documents of their newly-organized Congregation of Spanish and Portuguese Jews in London. One of these founding articles reads (in English translation) as follows:

“No Jew shall be allowed to cause to be printed in this city or outside it in these realms Hebrew or Ladino books or [books] in any other language without express permission of the Mahamad [communal governing authority] so that they be revised and emended; and him who should contravene this Escama [accord] we straightway hold as subject to the penalty of Herrem [excommunication], because it thus conduces to our preservation.”

The community’s restrictive publication policies were born of concerns both internal and external. Since many of its members were descended from, or themselves, New Christians who had reverted to Judaism, their ideas about religious belief and practice did not always conform with the orthodoxies of Jewish tradition. Moreover, the tenuous political position of Jews living in a country that, even today, has yet to officially rescind its medieval Edict of Expulsion meant that the community’s authorities could not allow anything potentially offensive to the Church or the Crown to emanate from their midst.

Naturally, the Sephardic leadership was committed to cultivating and buttressing religious observance among the Jewish public. To this end, like some of their Orthodox Ashkenazic cousins in the nineteenth century, they adopted a strict, hierarchical linguistic policy as a bulwark against assimilation. Hebrew was reserved for established ritual, Spanish for religious literature and certain religious functions, and Portuguese for management and administration of the congregation’s affairs. In addition, Spanish was used as a language of translation; the first English Jew to render the Sephardic liturgy in an authorized Spanish version was Haham (Chief Rabbi) Ishac Nieto (1687-1773), in 1740 (Rosh Hashanah and Yom Kippur prayers) and 1771 (daily, New Moon, Hanukkah, and Purim prayers). English, by contrast, was used primarily in the community’s communications with Gentile society, not internally.

With time, however, Spanish proved incapable of serving the needs of successive generations of English-born Jews who did not understand the Hebrew original of the prayer book. In the first half of the eighteenth century, efforts were therefore made to render the Sephardic siddur in English. Famously, Nieto’s scholarly brother Moseh (d. 1741) attempted to publish an English translation of the liturgy in London in early 1734. When his intentions came to the Mahamad’s attention, Nieto was sanctioned and ordered to turn over the original plates of the book so that it could not be printed. The primary problem with Nieto’s actions (aside from his failure to apply to the Mahamad for a license) may have been the language into which he sought to translate, for a request by him later that year to publish a Spanish version of “the books of monthly and yearly prayers” met with the Mahamad’s approval.

While Nieto’s English and Spanish siddurim never saw the light of print, the present work seemingly represents an earlier attempt to make the Sephardic liturgy available in the local vernacular. Together with two other codices held by the John Rylands Library in Manchester and the London Metropolitan Archives, it forms a small family of manuscripts rendering the principal daily, Sabbath, New Moon, and festival prayers into English. A fourth exemplar, whose current whereabouts are unknown but which is mentioned by the scholar of Anglo-Jewish liturgical translation history Simeon Singer in an article published at the end of the nineteenth century, was localized and dated “London, 1729, 23rd August,” attesting that this translation existed already four and a half years before Nieto’s publishing (misad)venture. The translation, which Singer characterizes as “marked in many passages by a certain vigour of style and quaintness of phraseology,” appears to have been forced to circulate exclusively in manuscript because of the community’s tight control over printing licenses.

The elegant penwork of the present lot demonstrates the skill of its professional scribe, who probably also copied the (less calligraphically accomplished) Rylands manuscript. Due to its beautiful decorative program, excellent state of preservation, and historical significance as an early witness to the “Englishing” of British Jewry, this book was included in both the 1887 Anglo-Jewish Historical Exhibition and the 1956 Anglo-Jewish Art & History Exhibition in the Victoria and Albert Museum marking the tercentenary of the resettlement of Jews in England. Further research is required to identify the translator and the (presumably Spanish/Ladino) Vorlage he used to produce his work.

Given the historical context in which it was created, this book opens a fascinating window onto the religious life of English Sephardim as they sought to negotiate the perennial struggle between tradition and modernity in a rapidly-changing society.

Sotheby’s is grateful to Alex Kerner, David Ruderman, and Aron Sterk for providing information that aided in the cataloging of this manuscript.

Alex Kerner, Lost in Translation, Found in Transliteration: Books, Censorship, and the Evolution of the Spanish and Portuguese Jews’ Congregation of London as a Linguistic Community, 1663-1810 (Leiden: Brill, 2018), ch. 12.

David B. Ruderman, Connecting the Covenants: Judaism and the search for Christian Identity in Eighteenth-Century England (Philadelphia: University of Pennsylvania Press, 2007), 34-37.