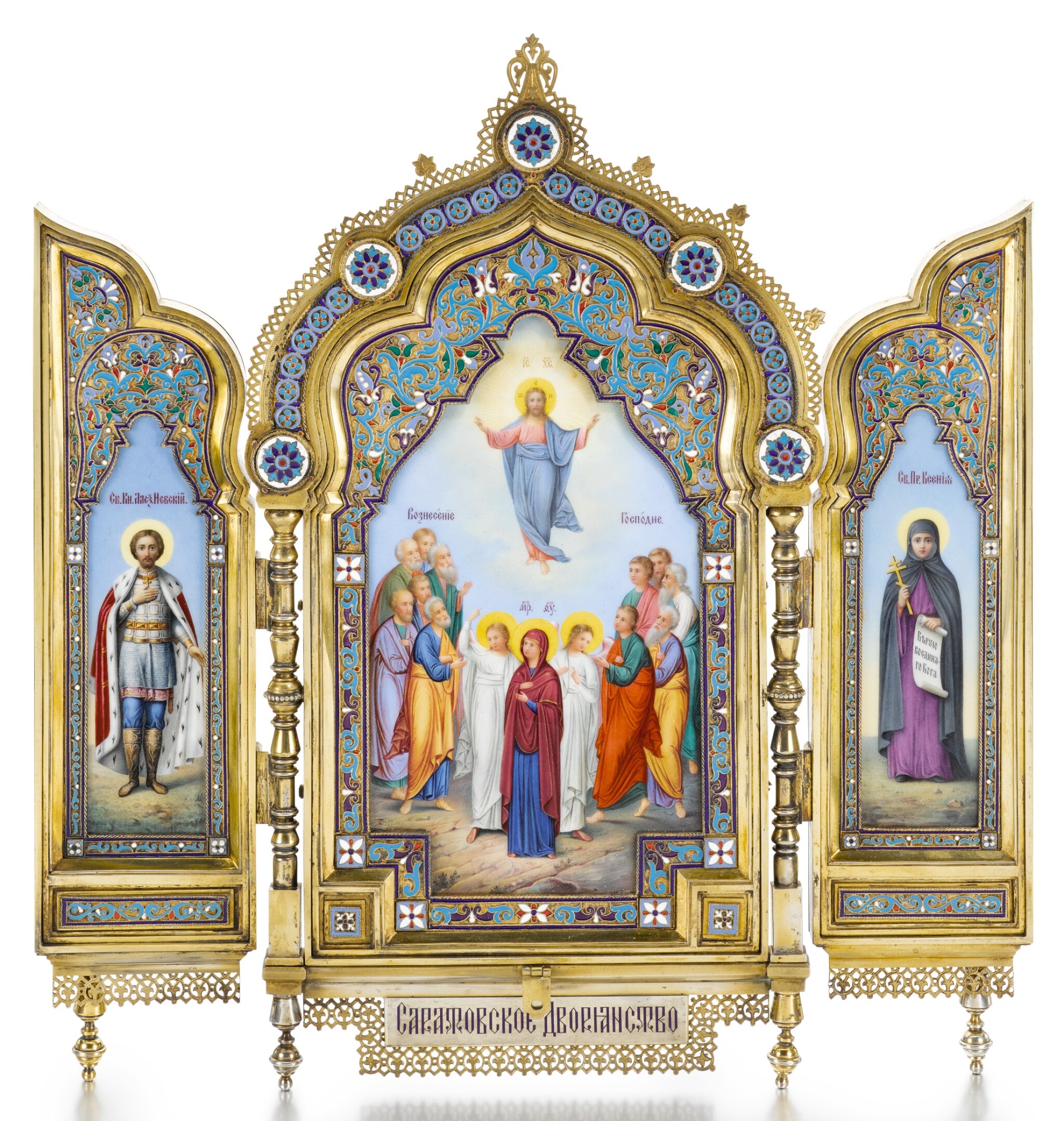 shaped as an ogee arch, the hinges moulded as columns, the frames enamelled in traditional shades of opaque blue and white on gilt grounds, the interior panels enamelled en plein with the Ascension of Christ flanked by Saint Prince Alexander Nevsky and Saint Blessed Xenia, the lower skirt titled 'The Saratov Nobility', the reverse of the hinged panels engraved with a Russian revival style ornament, struck on each panel with Khlebnikov in Cyrillic under the Imperial warrant, 84 standard

The upper edge of the openwork missing one finial. The gilt edges with some tarnish.

The central panels in excellent condition.

The outside of the hinged panels with some minor surface scratches and wear, the reverse with a further few minor scratches and one shallow scuff, 4cm wide.

The exceptional quality of enamelling and the overall execution of this work suggest that it was likely commissioned as a gift for a high-ranking recipient. While this skladen does not bare a dedicatory engraving, several Imperial presentation examples by Khlebnikov of an almost identical design are known.

One with an identical frame was presented to Emperor Nicholas II, then the Tsesarevich, probably on the occasion of his birthday and depicting his patron saint, sold Sotheby's London, June 2015, lot 301. For another very similar Khlebnikov example presented to Emperor Alexander III and Empress Maria Feodorovna in honour of their coronation in 1883 by the nobility of the Vladimir region, now in the Hermitage, please see T. S. Kharinkina (ed.), Imperator Aleksandr III, Imperatritsa Maria Feodorovna, St. Petersburg, 2006, p. 127, no. 871.

The largest and most strategically important city of the Povolzhye region, Saratov was often visited by members of the Imperial family, who bestowed their patronage on local cultural institutions. Throughout his reign, Emperor Alexander III retained close connection with Saratov and as a result of his support, the state Radishev museum of fine arts emerged in 1885; its collection was partially formed of donations from the Hermitage. Empress Maria Fedorovna also had connections to Seratov, establishing a friendship with M. N. Galkin-Vrasskiy, the mayor of Saratov between 1871 and 1879. This friendship continued well into the reign of Nicholas II, resulting in the establishment of Saratov University and Conservatory. As only the third of its kind in the Empire, the university turned Saratov into a true cultural centre of Povolzhye.

The Saratov nobility is known to have commissioned icons for the Imperial family, including an example presented in 1891 to Tsesarevich Nicholas II during his stay in Kuznetsk, Saratov Province.

The iconography of the present lot also suggests an Imperial connection: both Saint Alexander Nevsky and Saint Xenia were depicted as patron saints of the Romanov family, the former being the patron saint of Emperor Alexander III himself.