Property of the Terry and Lionel Bell Collection 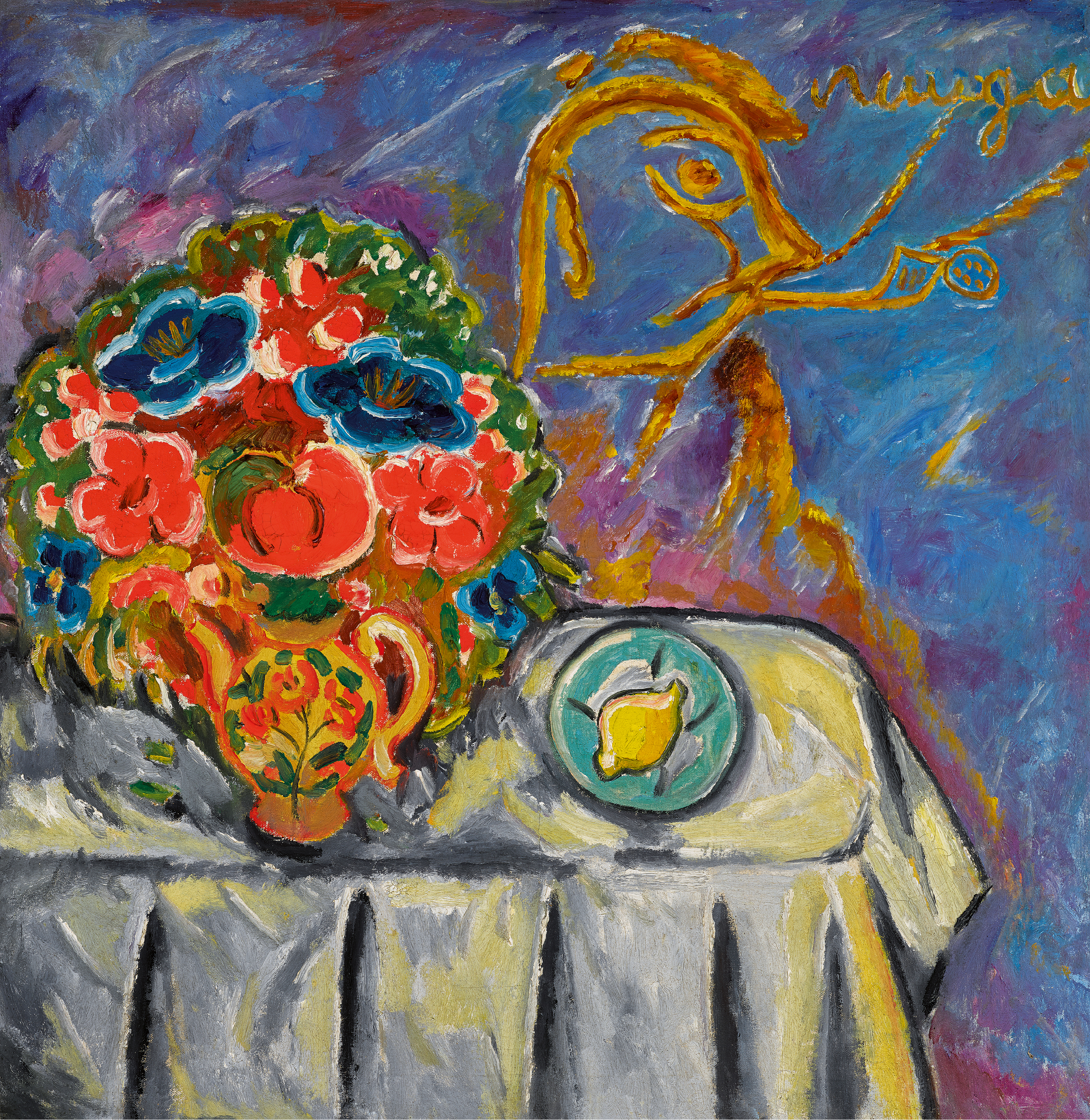 Property of the Terry and Lionel Bell Collection

bearing a Leonard Hutton Galleries exhibition label and the remnants of two handwritten labels in Cyrillic for the Moscow Repository for Contemporary Art on the reverse; further bearing the inscription Nature morte 2000 r on the stretcher

The painting would therefore appear to be in good condition.

With the architect and collector Nikolai Vinogradov

Acquired from the above by Terry and Lionel Bell in 1968

Accompanied by a signed photo certificate from Alexandra Tomilina-Larionov.

This large-scale still life with self-portrait by Mikhail Larionov hasn’t been exhibited in public for over sixty years. Painted in Russia before the artist’s departure for Europe, it has most in common with the works of his Soldier and Turkish series of 1910-1912, the culmination of his neo-primitivist period.

The flattened face with text in the upper right of the composition has its origins in the shop signs the artist incorporated in earlier works such as Walk in a Provincial Town and Provincial Dandy, (circa 1909), although here the logical compositional construct of a shop sign or poster has been removed and the head and its utterance are floating in two-dimensional space. The text deliberately resembles graffiti scrawled across the canvas, a joyfully crude device first seen in his depictions of soldiers, prostitutes and bawdy barrack life, a result of his year of military service between October 1910 and October 1911. The introduction of text was inspired by the coarse grafitti on the fences of military camps and here it appears like a speech bubble, as if literally recording the words spoken.

It is not just the floating head and text that disturb the pictorial space, space is ambiguous in general. The flattened background contrasts with the sense of volume provided by the impastoed bouquet on the table and the lemon on the plate appears as if viewed from above. Compositionally, the present lot has much in common with Sonia, La belle des soldats (fig.2). In both works the artist corrupts and abases the traditional genres of the still life and nude. The lack of reverence for his subject extends to his palette, the muddied ochre, bone black and ultramarine so typical for the period appear to have been smeared onto the canvas in a way which enraged critics who accused him of painting ‘with dirt’ (fig.3). Larionov himself referred to his ‘dirty aesthetic’ in evident enjoyment of this deliberate provocation.

It is probable that the painting was exhibited at the artist’s one-day retrospective held in December 1911 at the Society for Free Aesthetics on Bolshaya Dmitrovka. The generic title and Larionov’s problematic tendency to inaccurately pre-date his works makes it difficult to attribute to any of the 124 exhibits with certainty. On the stretcher of the present lot is the inscription Nature Morte 2000 r and the artist’s name. This is most likely in the hand of the artist Lev Zhegin and relates to the painting’s later history.

In 1915, Larionov and Goncharova found themselves accidentally exiled in Europe unable to retrieve the contents of their studios. Following the Revolution, a number of artworks were acquired by the newly-established IZO Narkompros and those remaining were removed for safe-keeping by the architect, restorer and friend of the artists, Nikolai Dmitrievich Vinogradov, to the Moscow Repository of Contemporary Art which had been set up to store artworks in response to the nationalisation or destruction of artists’ apartments and studio spaces. When the organisation was disbanded with the introduction of the New Economic Policy in 1922, Vinogradov stored as much of the property as he could in his personal flat and charged a fee for this service.

The artist Lev Zhegin acted as an intermediary between Larionov in Paris and Vinogradov and was responsible for the eventual return the artists’ property from Moscow to Paris in May 1927. A surviving letter from Zhegin to Vinogradov dated to 3 December 1925 (now in a private collection) asks him to consider the financial burden of the not insignificant storage charges: ‘even the most modest charge, with such an enormous quantity of paintings and with the recent low value of the Franc, adds up to a figure that M.F. [Larionov] can scarcely manage… I completely agree that any history of Russian art of the last ten years would be incomplete without the brilliant names of Larionov and Goncharova. You can either sell or donate their paintings to a museum. For this purpose only two museums will do: The Tretyakov and the Leningrad Russian Museum (Larionov categorically refuses to sell to the provinces)…'. It was Zhegin who separated out those works which were to be sent on to the artists in Paris and those which were to be sold to museums and marked the stretchers accordingly.

The Terry and Lionel Bell Collection

This work comes from the collection of Terry and Lionel Bell. Lives Well Lived could be the title of the nearly 70-year story the Bells shared together. They met and fell in love in college, married in 1948, and started a family in 1951. But that was just their beginning: with their mutual respect and support, they pursued their individual and shared interests. Terry was among the first class of volunteer docents to lead public tours for the newly built Los Angeles County Museum of Art in the early 1960s, and became a gourmet cook. Lionel’s business took him to New York City regularly, and Terry was happy to join him occasionally.

Terry and Lionel travelled to most corners of the world and their collection reflected it – from paintings to drawings to sculptures – many of which have been donated to LACMA, UCLA Fowler Museum and the Israel Museum of Art. Diversity was on display in their home and they were so very proud to donate many art pieces to various museums around the world.

Terry’s culinary and leadership abilities as well as her volunteer talents were displayed at LACMA as she curated the menus for the exhibition opening events for many years before a full-time event planner was eventually hired. She was chair of both the Docent Council and Art Museum Council. She became a trustee and ultimately a lifetime trustee of LACMA.

Through it all, they both knew how very fortunate they were, and always enjoyed opening their home to their friends and community.