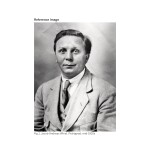 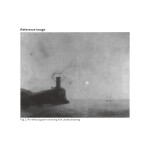 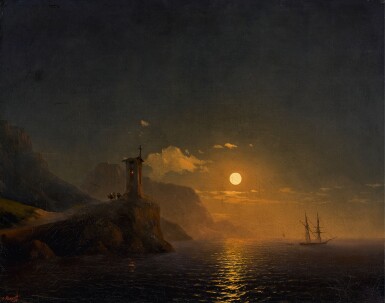 IVAN KONSTANTINOVICH AIVAZOVSKY |Chapel by the Coast on a Moonlit Night

IVAN KONSTANTINOVICH AIVAZOVSKY |Chapel by the Coast on a Moonlit Night

Chapel by the Coast on a Moonlit Night

The canvas is lined and securely attached to a keyed wooden stretcher. This is providing a stable structural support. There is evidence of staining on the reverse of the canvas which is possibly attributable to the lining adhesive.

The paint surface has a relatively even varnish layer. There is a small horizontal abrasion with an associated retouching below the far left part of the upper edge and two further discoloured retouchings which have a dark appearance in the upper left quadrant of the sky.The paint surface has an overall pattern of fine lines of craquelure which are raised in places, most notably within the lower left quadrant of the composition. These appear stable at present. There are also slightly raised stretcher-bar lines corresponding to the central vertical stretcher member. These are stable. Inspection under ultra-violet light shows a discoloured and opaque varnish layer which prevents the ultra-violet light from fully penetrating. Inspection under ultra-violet light also highlights the retouchings mentioned above. There are also tiny spots of inpainting corresponding to an area of thinness within the hills in the lower left quadrant of the composition. There are a number of linear areas of fluorescence within the sky in the upper right quadrant of the composition which appear to be slight disturbances to paint surface/varnish layers which are almost imperceptible in natural light.

The work would therefore appear to be in good and stable condition.

Acquired by Jacob Andreas Whist in Petrograd, circa 1915

Thence by descent to the present owners

Chapel by the Coast on a Moonlit Night has remained in the same family since the mid-1910s when it was acquired by Jacob Andreas Whist (1885-1967), a Norwegian businessman and entrepreneur. Originally from Korgen in the north of Norway, Whist moved to Russia in 1901 to join his two older brothers' trading business in Murmansk. He then settled in St Petersburg where he was active in the travel industry, opening the St Petersburg branch of the Norwegian travel agency Bennets in 1915. Whist lived in the Bashmakov House on the Moyka embankment within close proximity of his office on Nevsky Prospect, renting from the widow of the Swedish entrepreneur and engineer Ludvig Nobel (1833-1888), who had purchased the building in the 1870s.

The economic and political turmoil of 1917 left Whist with no alternatives other than to close up shop and leave the country. Initially arrested and interrogated, he escaped before the political situation escalated any further. Before his departure for his native Norway Whist offered a Russian noble lady to enter into a pro forma marriage with him in order to help her to emigrate to Canada where her relatives resided. The marriage ceremony was conducted at the Norwegian embassy in Petrograd, and soon after the newlyweds departed for Tallinn, whence the noble lady went to Canada and Whist to Oslo. Whist managed to save his belongings, including the present work, by sending them to Murmansk, from where they were subsequently shipped to Norway with the help of his elder brother Ole.

The present work is included in the numbered archive of the artist's work compiled by Gianni Caffiero and Ivan Samarine.

Property from a Private Collection, Norway
IVAN KONSTANTINOVICH AIVAZOVSKY |Chapel by the Coast on a Moonlit Night
Lot Closed
Lot 21