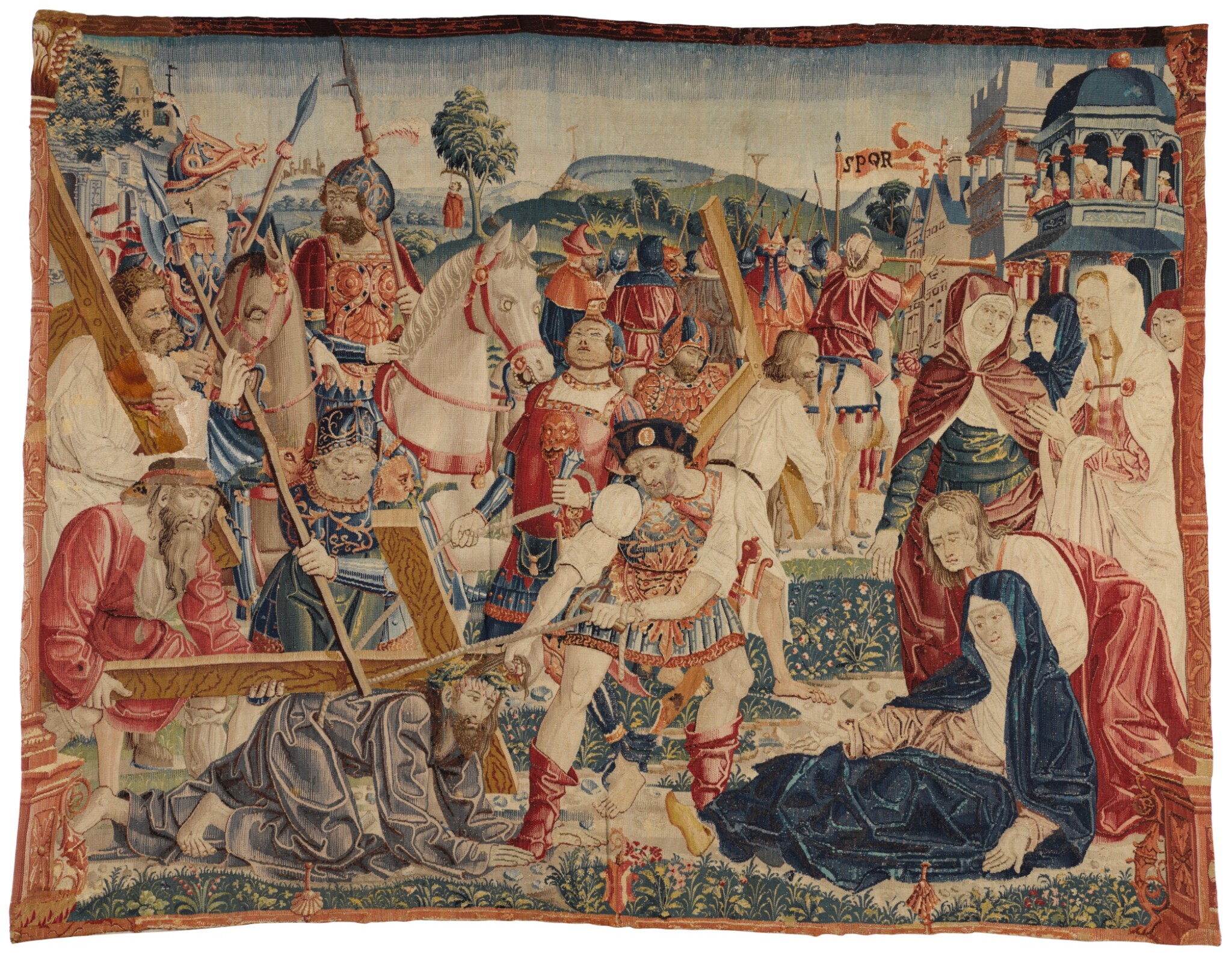 woven in wool, depicting Christ carrying the cross in the procession on the road to Calvalry, with the Virgin Mary collapsed on the road side, the figures extending into the distant hills, past buildings and onlookers in the upper colonnade, the scene flanked by narrow copper coloured Corinthian all' antica columns on pedestal supports, linked across the top by a strip of dark brown with copper coloured motifs, and the lower edge with a light copper coloured band with leaf motifs, and supporting a small shield the coat-of-arms (la crosse en pal) of the French d'Amboise family, with a bishop's crosier, and flanked further along the lower edge with two drop scallop shell motifs, the insignia of St James, reduced in size

This tapestry is lined and has old hessian and hoops across the top. It is recommended that Velcro is attached across the top for hanging in the future. The panel has been slightly reduced in height and width.

The tapestry has been professionally restored. There are areas of small repairs and areas of reweaving. For example within the blue robe of Mary Magdalene, where it appears darker, and their respective dark blue areas in the hood of the lady in the top right corner are later, and the there are other areas of this colour which are later in accessories. The foot of Mary Magdalene is later. The dark burgundy highlights in folds of the robe of Christ seem later, and the robe generally is a different colour hence emphasising the difference and this is because of fading. On the reverse the robe is a rich raspberry/burgundy colour, now faded. There are repairs in small areas of the dark brown and terracotta repair in other areas. There are some repairs in the left hand side, to the lower section of cross held by the figure on the far left edge, and visible in the white robe, and border in the area nearby.  In addition, in details, the mouths and faces have some repairs, probably to give them some definition, and some of darker outlines are later, see for example edges of fold of textile over the arm of the lady in the far right side. There is a later section of reweaving to the narrow border in the top right corner, and the top left corner tip including main design of sky is later. There are old repairs in the blue sky, and the white sky, especially in the top right corner, and around the SPQR banner. The lower edge is distressed and has inset section in lower left corner.

There is very good colour balance overall. It has been very finely woven and there are areas of exceptionally well executed early tapestry technique. Overall appearance is balanced. Overall in sound and stable professionally restored condition. This is a very interesting historical tapestry.

This panel is the missing section from a wider panel series depicting narrative scenes from The Life of Christ and the Virgin. The series is probably identified with the choir tapestries recorded at Clermont Cathedral in 1883. Jacques d'Amboise (d.1516), Abbot of Cluny and then Bishop of Clermont (1505), was the seventh son of Pierre III Chaumont d'Amboise (d.1473), counsellor to Charles VII and Louis XI, and the family were great patrons of the arts. On appointment to bishop of Clermont, changes were made in the Cathedral and Jacques commissioned a set of choir tapestries.

The known panels in the set are in The State Hermitage Museum, Saint Petersburg, with two having been acquired from the Basilevsky collection in 1884, and another two from the set obtained in 1887, having belonged to Prince Gagarin. They take the form of a relief of individual narrative scenes divided by columns, which was a standard device in choir tapestries from the late 15th century. The unusual feature of this particularly finely woven series is the compositional attention to realistic illusion of the scene and the perspective, with accomplished foreshortening. Except for the Trivulzio Months, designed by Bramantino, early 1500, the Hermitage Life of Christ and the Virgin tapestries are considered the earliest application of these Italian design concepts to a narrative tapestry series. The series is unusual and recognised for its importance in Italian design characteristics inspired by Andrea Mantegna and introduced into tapestry design by Raphael, with the Acts of the Apostles, in 1515. It has been proposed that the designer of the series, although unknown, must have been familiar with the works of the above cited artists.

The known panels are as follows: three scene panels with the Meeting of Joachim and Anna, the Birth of Mary and the Presentation in the Temple (153cm high by 663cm wide), another with the Betrothal of Mary and Joseph, the Annunciation and the Visitation (154cm by 584cm), the third with the Death, Burial and Assumption of the Virgin (159 by 611cm), and a two scene panel with the Adoration of the Shepherds (153 by 372cm). The combined length of the overall set in the Hermitage is around 22 metres, and archival records note that originally the tapestry panel would have extended around the choir, and therefore there would have been more than is presently known. It was therefore proposed that there would have been further sections which could have included more scenes from the Life of Christ. The present fragment is a complete width section of a scene from between columns and is of this subject, and identified by Nello Forti Grazzini, concluding that other scenes from the Passion would have been part of the original scheme.

The panel with the Coronation of the Virgin includes a swag along the lower edge which includes the coat-of-arms, crosier and the pendant shells, as seen on the present panel.