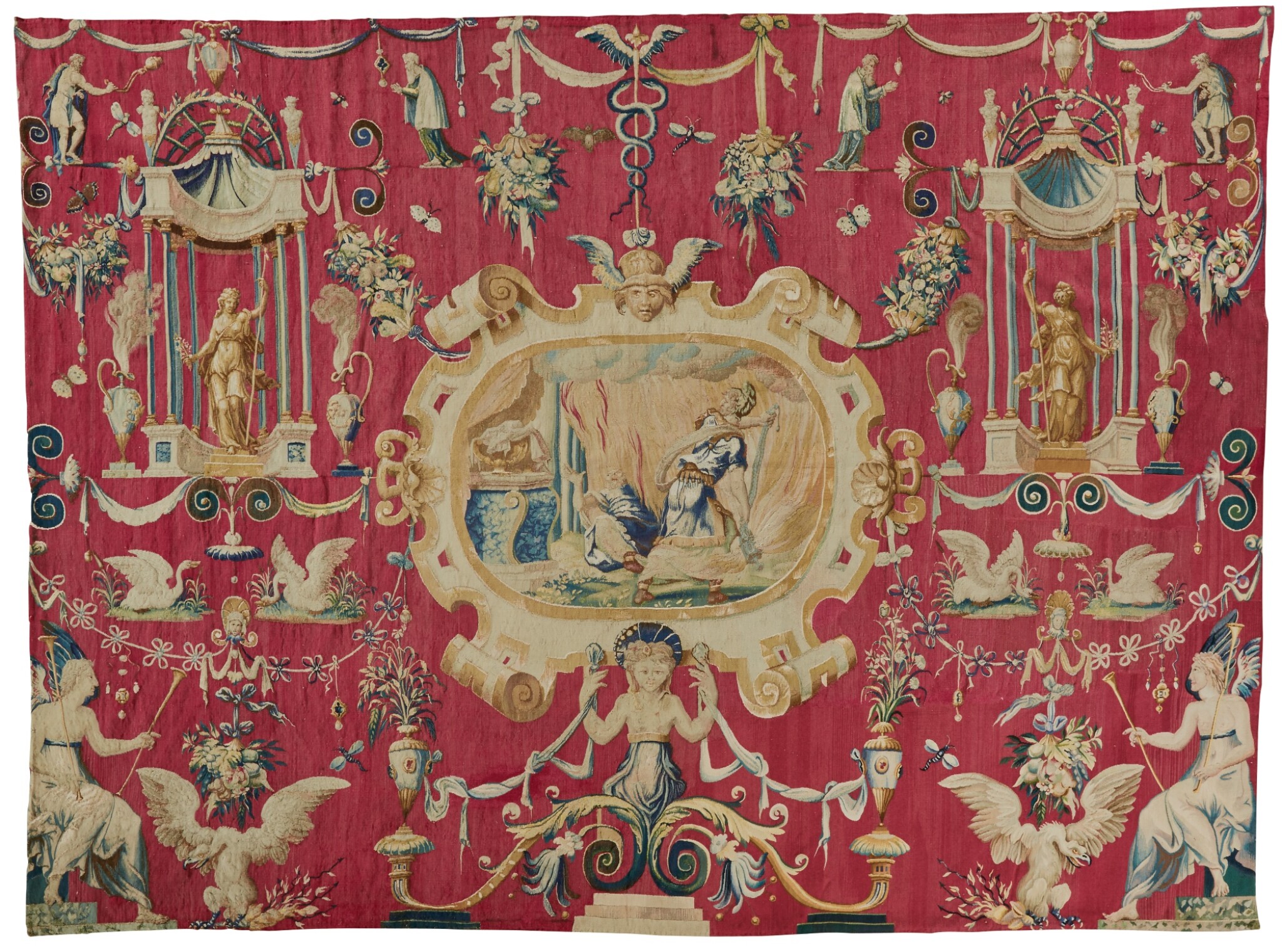 woven with a composition of floating imaginary, symmetrical structures around a central architectural cabochon with an exuberant strapwork surround enclosing a figural group possibly the ‘Sacrifice of Joab’, and incorporating allegorical figures across the top and a seated figure of Fame with two trumpets (tuba) in each lower corner, together with the winged helmeted head of Mercury (messenger of the Gods) and the caduceus (symbolic of eloquence and reason), the swan (associated with beauty, music and for guiding the chariot of Venus), the eagle with flaming thunderbolts (attribute of Jupiter), and other allusions to the antique in the depiction of objects and bruhl parfum, linked by ribbon tied pendant floral and fruiting swags, with jewels and pearls, and butterflies and insects, all against a distinctive cerise red ground; lacking border and with rewoven right hand corner

In stable professionally restored condition. The lower right corner and sections of top right edging are later reweaving. Well executed and with comparable fineness and tension.

Fragment and reduced in size. Lacking borders. With linen backing with Velcro attached for hanging purposes. The section of later reweaving is approximately 200cm along the lower right corner: it starts from the scroll centre of lower edge and extends up to approximately 65cm and stepping up to 68cm underneath arm of female term figure and then stepping up to 77cm near the outer male term figure's trumpet and reducing to 20cm wide above the term figure's head, and the height from the lower right corner to the top of the rewoven area is approximately 149cm up the right side, with a spur of 16cm in height and 57cm in length of reweaving extending out above the original weave of the swans and most of garland below. There is another horizontal strip of later reweaving approximately 14cm high and 43cm wide (which extends out from the side edge through the swag of flowers and to the edge of narrow columns) and the reweaving continues up to the top right corner for a width of 6cm, from the outside edge.

The excavation in the 1480s of the ancient Roman house, Domus Aurea (Golden House), built in the first century AD for the Emperor Nero, revealed wall paintings with elegant compositions of compartmentalised pavilions, deities and mythological creatures emerging from the yellow walls, and they inspired artists at the time and the ‘Grotesque’ tapestries that followed. The compositions were captivating in their combination of heroic virtues and attributes within light-hearted and compositionally balanced architecturally inspired designs.

The ‘Grotesque’ tapestries were being produced in Italy, France and the Netherlands (including Brussels) by the mid 16th century. Each production centre took on the motifs which were generic and distinctive in relation to the original ‘antique’ inspiration and interpreted them in different ways. There was often a combination of motifs representative of the secular and the religious, set in an imaginative composition, with in relief and without perspective and with elements cohesively floating against the backgrounds. In France the designers, such as Jean Cousin the Elder, followed Raphael’s format, of including gods and goddesses with antique ornamental motifs. Paris was inevitably the leading area of French trade, although few tapestries of this period have been identified for weaver’s and town mark were not required before the beginning of the 17th century, unlike Flemish tapestries. Documents show that there were thirty of forty active master weavers, who received commissions from patrons from all over France. The tapestry merchants and weavers had close ties with those in the Netherlands (Brussels) at this time. With the growing influence of the ‘Grotesque’ tapestries, records note that Jean de la Chesnaye commissioned a group of seven pieces of Jupiter Grotesques, in 1550, against a white ground within red borders, from Louis de Cambry. There was another set woven by Antoine Fabert in Paris, purchased the same year by the brother of duchess of Étampes, Charles de Pisseleu, bishop of Condom.

For this similar and comparable tapestry, described as Grotesques with cartouche depicting the Death of Joab, woven in Paris, circa 1566-1585, in wool and silk, within a compartmentalised border (approximately 417 by 527cm), from the Mobilier National, Paris (GOB-138), see Lorraine Karafel, Raphael’s Tapestries, The Grotesques of Leo X, Yale University Press, 2016, Chp. 5, pp.133-147, fig. 137. The version has many similar motifs, including standing allegorical figures in columned niches, the design in a different arrangement to the offered example, and notably has a similar central cabochon and strapwork surround enclosing two figures before a flaming altar, and the ground is a similar cerise red. The border incorporates various classical motifs, eagles, swans and swags against a yellow ground, and has a coat-of-arms in each corner against indigo ground. It was probably woven by a Paris workshop, from coloured designs, between 1566 and 1585 for Claude de la Châtre, who was the governor of Berry and marshal of France. For an example of an influential grotesque ornamental panel etching see Livres de Grotesques, Jacques Androuet Du Cerceau (French, Paris, 1510/12-1585 Annecy), 1566, The Metropolitan Museum of Art, New York (The Elisha Whittelsey Collection, 1949, Acc.No.49.95.321), which shows a similarly delicate composition, which could be interpreted to cover walls.

The original ‘Grotesques’ series was ordered by Pope Leo X from Pieter van Aelst of Brussels in about 1520, and the designs were attributed to Giovanni da Udine by Vasari. The first series of this set in wool, silk and metal thread (no longer in existence; disappeared in 1767) that marked the introduction of the ‘Grotesques’, tapestries that conjured up the wall paintings found in the Domus Aurea. The compositions included various mythological figures including satyrs. Guy Delmarcel, Flemish Tapestries, London, 1999, pp.86-94, Flemish tapestries and the Italian Renaissance, discusses the Brussels weavings of the mid 16th century, including an extraordinary ‘Grotesque Tapestry, The Triumph of Bacchus,’ Brussels, probably Dermoyen workshop, after Giovanni da Udine, circa 1540 (470 by 745cm), woven for Henry VIII, now at Hampton Court Palace, Royal Collection (RCIN 1362), HM Queen Elizabeth II.

For a tapestry inspired by the initial Brussels series after Raphael, see ‘Grotesque with the Gods: Flora’, Antwerp, workshop of Michiel Wauters, pre 1680, incorporating delicate architectural features, a central allegorical figure in a niche, pendant medallions enclosing other figures, against a distinctive red ground, within a narrow border with swags of ribbon, trophies and strapwork (approximately 303 by 540cm), in the Rosenborg Castle, Copenhagen, Delmarcel, op.cit. p.257. Following through with the compositions of dominant central motifs flanked by combinations of motifs, there are other Brussels weavings which interpreted the ‘Months’, and examples with central figures flanked by variations of the themes which are characteristic of the ‘Grotesques’, (although with motifs on a larger scale in more compact composition), are found in a ‘Grotesque Months-October’ tapestry, after Cornelis de Ronde and Jan van der Vyst, circa 1565 (428 by 530cm) in the Kunsthistorisches Museum, Vienna, and a ‘Grotesque Seasons: Autumn’ tapestry, with Bacchus, circa 1560 (393 by 585cm) in the Hermitage, St Petersburg, ibid.p.87.

Charissa Bremer-David, Conundrum – Puzzles in the Grotesques Tapestry Series, J.Paul Getty Museum publication, Los Angeles, California, 2015, for research on the Grotesques series woven in the Beauvais workshop, after Berain, originally conceived and designed by 1688 and produced profitably for nearly four decades, and of which it is estimated 300 were originally woven and around 150 individual pieces are recorded to date. They in turn took their inspiration from the Grotesques tapestries and print sources that preceded this era;

Thomas Campbell, Tapestry in the Baroque, Threads of Splendour, Metropolitan Museum of Art Exhibition, New York, October 17, 2007-January 6, 2008; and at the Palacio Real, Madrid, March 6-June 1, 2007, Yale University Press, 2002, for an interesting interpretation of a Grotesque tapestry by an English workshop, p.175, fig. 87., ‘Grotesque (Crotesco) – Sense of Smell’ tapestry, after designs by Francis Clein, woven at Mortlake, circa 1625-35, in wool, silk and metal-thread (350 by 457cm), The Duke of Rutland, Haddon Hall;

Guy Delmarcel, Flemish Tapestries, London, 1999, pp.86-94, Flemish tapestries and the Italian Renaissance, discusses the Brussels weavings of the mid 16th century, including an extraordinary ‘Grotesque Tapestry, The Triumph of Bacchus,’ Brussels, probably Dermoyen workshop, after Giovanni da Udine, circa 1540 (470 by 745cm), Windsor Castle, Royal Collection, HM Queen Elizabeth II. It was the first edition of this set in wool, silk and metal thread (no longer in existence; disappeared in 1767) that marked the introduction of the ‘Grotesques’, tapestries that conjured up the wall paintings found in the Domus Aurea. The original ‘Grotesque’ series was ordered by Pope Leo X from Pieter van Aelst of Brussels in about 1520, and the designs were attributed to Giovanni da Udine by Vasari. The compositions included various mythological figures including satyrs;

Lorraine Karafel, Raphael’s Tapestries, The Grotesques of Leo X, Yale University Press, 2016, for a comprehensive discussion of the series and the printed sources, and Chp. 5, pp.133-147, The Triumph of the Gods, Production, Re-editions and Related Tapestries, for the influence it had on other weavings.

Edith Appleton Standen, European Post-Medieval Tapestries and Related Hangings in the Metropolitan Museum, 1985, Vol. I, pp.100-109, No.11, 12, and 13, for three Brussels, mid 16th century, Grotesque tapestries, including ‘Grotesque with Minerva’, perhaps designed in the workshop of Del Vaga, and with the coat-of-arms of the Doria family;

G.F. Wingfield Digby, The Tapestry Collection – Medieval and Renaissance, Victoria and Albert Museum, London 1980, Nos. 45-47, pp.50-54, pl.65-67, for three Flemish ‘Grotesque’ tapestries, Brussels and Oudenaarde, mid 16th century, including a ‘Grotesque with Ceres’ tapestry, with the goddess standing in a central columned niche with symmetrical vertical composites of motifs flanking each side, within a border incorporating the coat-of arms of the Doria family.