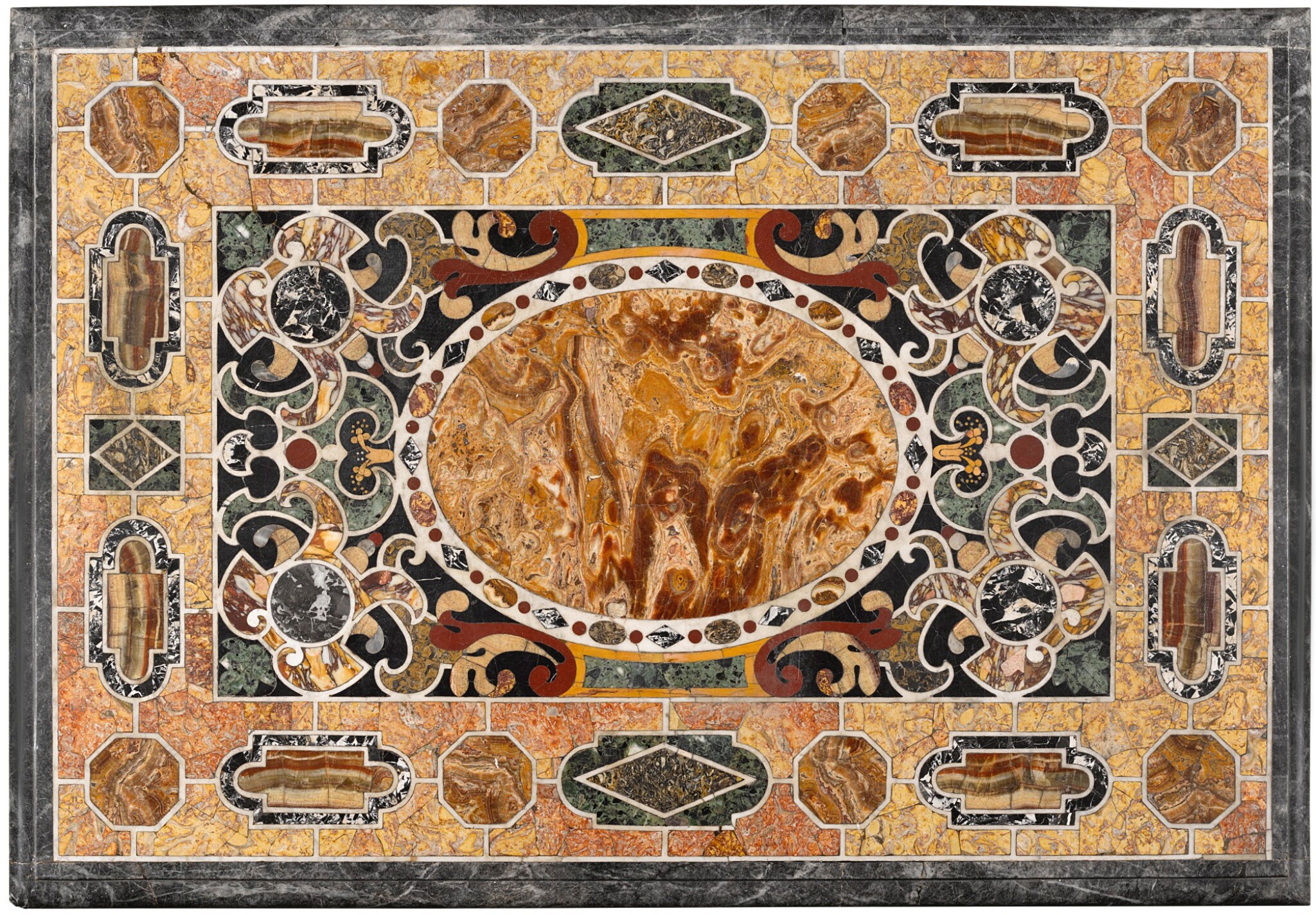 the rectangular moulded top inlaid with alabaster in the centre, the surroundings with hardstone-inlaid scrolls and strapwork, the outer border with alternating band of roundels and horizontal tablets inlaid with various hardstones against Spanish brocatello

This important table top is in good conserved condition having been restored probably prior to its acquisition in 1820. There seems to have been a break going diagonally through the table with some replacements to stones along this breakline. Probably as a result of the break, there are some repairs to the Spanish brocatello border which showcases different tones. One corner roundel to inner panel has a replacement grey marble instead of bianco e nero as the other three. Very minor marks and scratches consistent with age and use. Some losses, notably one small loss to the alabaster roundel in the centre, as visible in the catalogue photograph, and some minor replacements throughout. The grey marble border with repairs to three corners, one of them chipped. The back of the table top with stucco from the two marble brackets that were supporting the top at Killadoon House. The back also with six metal brackets from the old restoration and with an irregular slate layer towards the centre underneath the top.

Inventory, April 1830, 'One Inlaid Marble Table' in the Entrance Hall;

Inventory, 27th June 1836, 'Inlaid marble table of the finest marbles upon marble brackets sculptured by Steward in Dublin. The table was bought at Rome by Lord Leitrim in 1820' in the Entrance Hall

S. Jervis and D. Dodd, Roman Splendour and English Arcadia: The English taste for pietre dure and the Sixtus Cabinet at Stourhead, London, 2015.

The present table top showcases the natural beauty of stones and embodies the triumph of Rome from the early 16th century as a centre for pietre dure. The archaeological discoveries of the time as well the lasting passion for marbles and rare stones, so significant since Imperial Rome, lends the table a connection with Antiquity and most specifically to the splendour of the Eternal city where the tradition of skilled marble-working had survived.

The technique of pietre dure results in the neat and painstaking arrangement of finely cut hardstones inset on a ground of white marble. This table is distinctively Roman, namely for its subtle blend of geometrical and abstract motifs. Such geometry is noticeable, for example, in design dated from circa 1565 by the Italian Giovanni Antonio Dosio (see Jervis, p.48, fig. 52) and on several table tops, one in Aston Hall (ill. Jervis, p. 5, fig.4), one sold Sotheby's London, 7 December 2010, lot 22 (£163,250) one sold Sotheby's London, Treasures, 3 July 2013, lot 10 (£962,500).

The area surrounding the typical large roundel of alabaster in the centre of a Roman table top is often decorated with a border with small geometric shapes and then abstract motifs such as scrolls and strapwork. Related examples are the Museo del Prado (ill. Jervis, p.25, fig. 10) and one dated from the early 17th century at Hatfield House, Hertfordshire (ill. Jervis, p. 6, fig. 5).