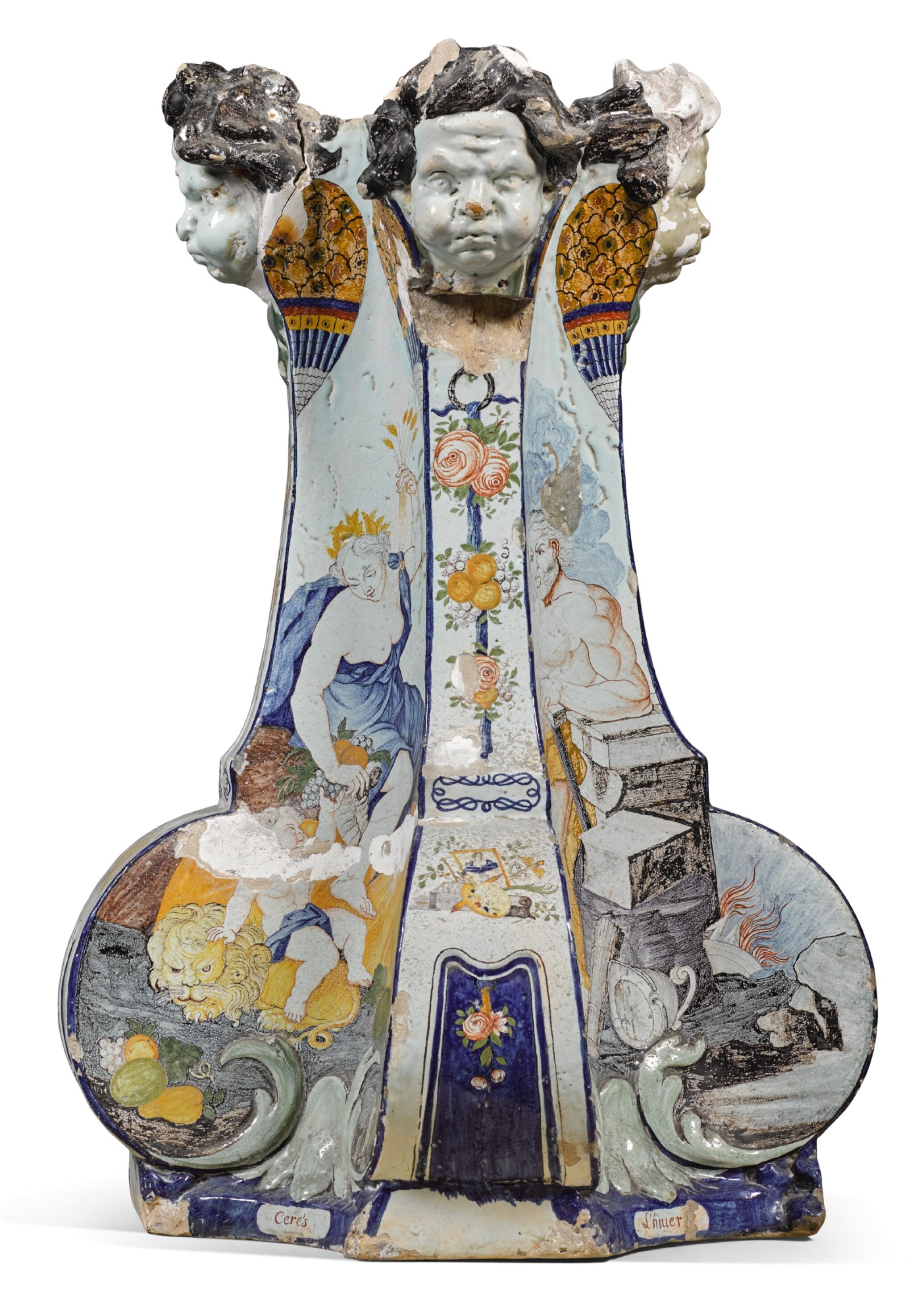 of cruciform section, each volute footed pilaster descending from a cupid mask, possibly painted by Pierre Chapelle with allegorical figures above titled cartouches, together with a fragment of the stand moulded with a recumbent lion and painted with allegorical beasts, damages, repairs and losses

The condition report is currently unavailable. Please email Florence.Flood@sothebys.com to request a report.

The present pedestal was designed to support a terrestrial globe, also made in faience, and would have had a pair supporting a celestial globe. It is related to a documentary pair of globes painted by Pierre Chapelle at Rouen in 1725 which are in the collection of the Musée Céramique, Rouen, formerly in the Château of Boisguilbert, which are extensively published in the literature1 (fig.1).

The pedestal is surmounted by four cherub masks emblematic of the Four Winds above painted panels of figures representing the four seasons, Vulcan, titled L’hiver, Flora, titled Printems (sic), Ceres, titled Cere’s (sic) and a group of Bacchus (title lacking). The columns are reserved with vignettes of trophies emblematic of three of the liberal art (Geometry, Grammar and the Theory of Music) and painting. The pedestal is supported by a base (now partly missing) with allegorical animals, the surviving fragment includes an alligator and a horse, emblematic of the Americas and Europe from the Quarters of the Globe.

The terrestrial globe is inspired by a map by Guillaume Delisle from 1700, the Celestial globe is taken from the globe commissioned for Louis XIV from Vincenzo Coronelli in 1681. The pedestal for the celestial globe uses figures emblematic of the Elements; Vulcan and Ceres are again used to symbolise Fire and Earth in this case.

Apart from the pair in Rouen only two other pairs are believed to have been made which are now lost.  One pair were for the Château de Choisy and the other for Bonnier de La Mosson who commissioned a famous cabinet of curiosities for his library at the Hôtel du Lude, Paris. Bonnier de La Mosson was the son of Joseph Bonnier, treasurer of the purse of the States of Languedoc and one of France’s richest men. Having inherited his fortune, he set about creating a home for his library. One of the faience globes appears in Le cabinet de Physique de Bonnier de La Mosson, by Jacques de Lajoue, 1734, formerly in the Beit collection and now in a private collection. The extraordinary collection of scientific curiosities was housed in a series of cabinets and rooms designed by Jean-Baptiste Courtonne. Amongst the library and workshops, collections reflecting the owner’s fascination with science, mechanics, medicine and the natural world were housed in Cabinets d'Anatomie, a Cabinet de Chimie, a Cabinet de Pharmacie ou Apoticairerie, a Cabinet de Drogues, a Cabinet d'Histoire Naturelle, a Cabinet de Mechanique et de Physique and Cabinet de Tours. After his untimely death in 1744 an auction of effects was arranged by Edme François Gersaint who offered nearly a thousand lots. Amongst them, lot 614 describes a magnificent pair of faience globes, one celestial, the other terrestrial, mounted on two pedestals, also in faience and decorated with different attributes relating to astronomy and geography which the author recommends for use in a gallery or large library2. Given the scarcity of these items and the availability of this pair in the 18th century it is likely that the present plinth is a surviving fragment from the Bonnier de La Mosson collection.