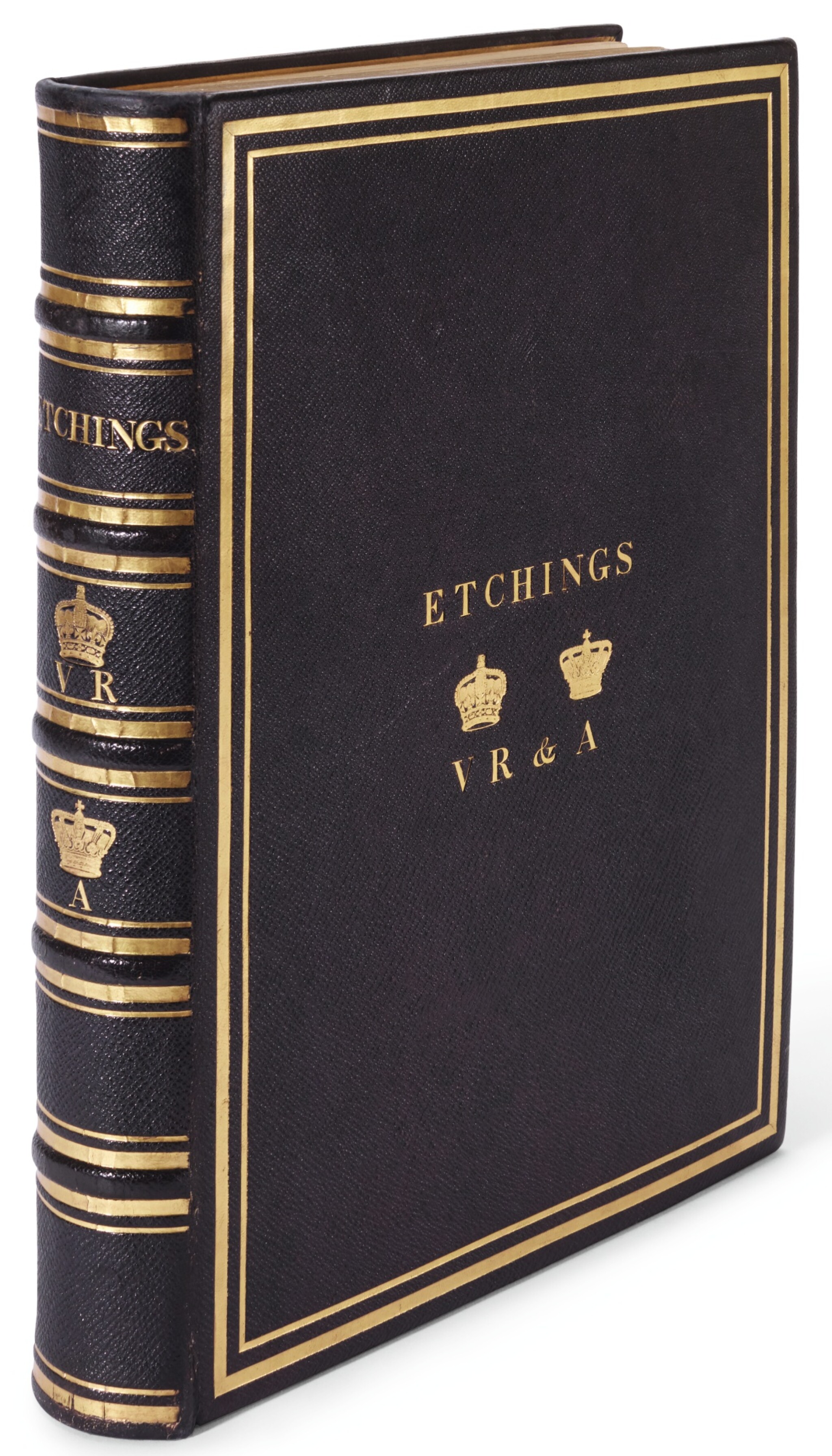 A talented amateur artist, Queen Victoria took up etching as a pastime hobby, having been introduced to the art by her husband soon after their marriage in February 1840. Their first etchings were made on 28 August 1840, guided by Sir George Hayter and later by Sir Edwin Landseer. The royal couple etched frequently for about four years, the Queen being the more prolific, producing sixty-two plates as against the Prince's twenty-five. The plates were etched at Windsor Castle, sometimes with both Victoria and Albert working together on the same plate, and it is believed some proof impressions were pulled from a small press there. Some of the plates (though largely the proofs) were bit and printed by the Queen's dresser Marianne Skerrett, though most were re-bit and printed by Colnaghi. However, very few of each of the etchings were printed, the pastime being largely for the royal couple's own amusement; an occasional print and a very few sets, like the present, were distributed as gifts.

"The etchings offer a picture of the interests of the royal couple in their early married years. The prince had a keen interest in art and the Old Masters; he introduced Queen Victoria to German romantic literature and Goethe and Schiller in particular. Prince Albert read to the Queen from Schiller's works. Their family absorbed them and the children and dogs play an important role in the etching subject-matter" (The British Museum).

Two complete sets of the etchings are known: the Royal Collection includes a complete set of etchings, as well as many proofs, kept by Queen Victoria; a second set was presented by King George V to the British Museum in 1926 and were first put on public display at the museum this summer (July to September 2019). The present nearly complete album was presented to Sir Theodore Martin, the official biographer of the Prince Consort in 1869. Martin's biography, Queen Victoria as I Knew Her (1901) recounts the receipt of this album along with the now lost letter that originally accompanied it: "Of Her Majesty's executive power as an artist I cannot speak, as what I know of her work is confined to a few slight sketches, and the etchings which she made, when Prince Albert and herself were for a time fascinated by that attractive but difficult process. Of these I owe to the Queen's kindness a complete series. They came with the following note:- 'Osborne, May 3, 1869. The Queen sends Mr Martin to-day a volume of the beloved Prince's and her own etchings, which she has had purposely bound for him, and which she hopes he will place in his library, as a trifling recollection of his kindness in carrying out so many of her wishes."'

The album offered here includes all but five of Queen Victoria's etchings and all but two of Prince Albert's. The etchings not included are generally reworkings of other etchings present. A complete list of the etchings in this volume is available upon request.