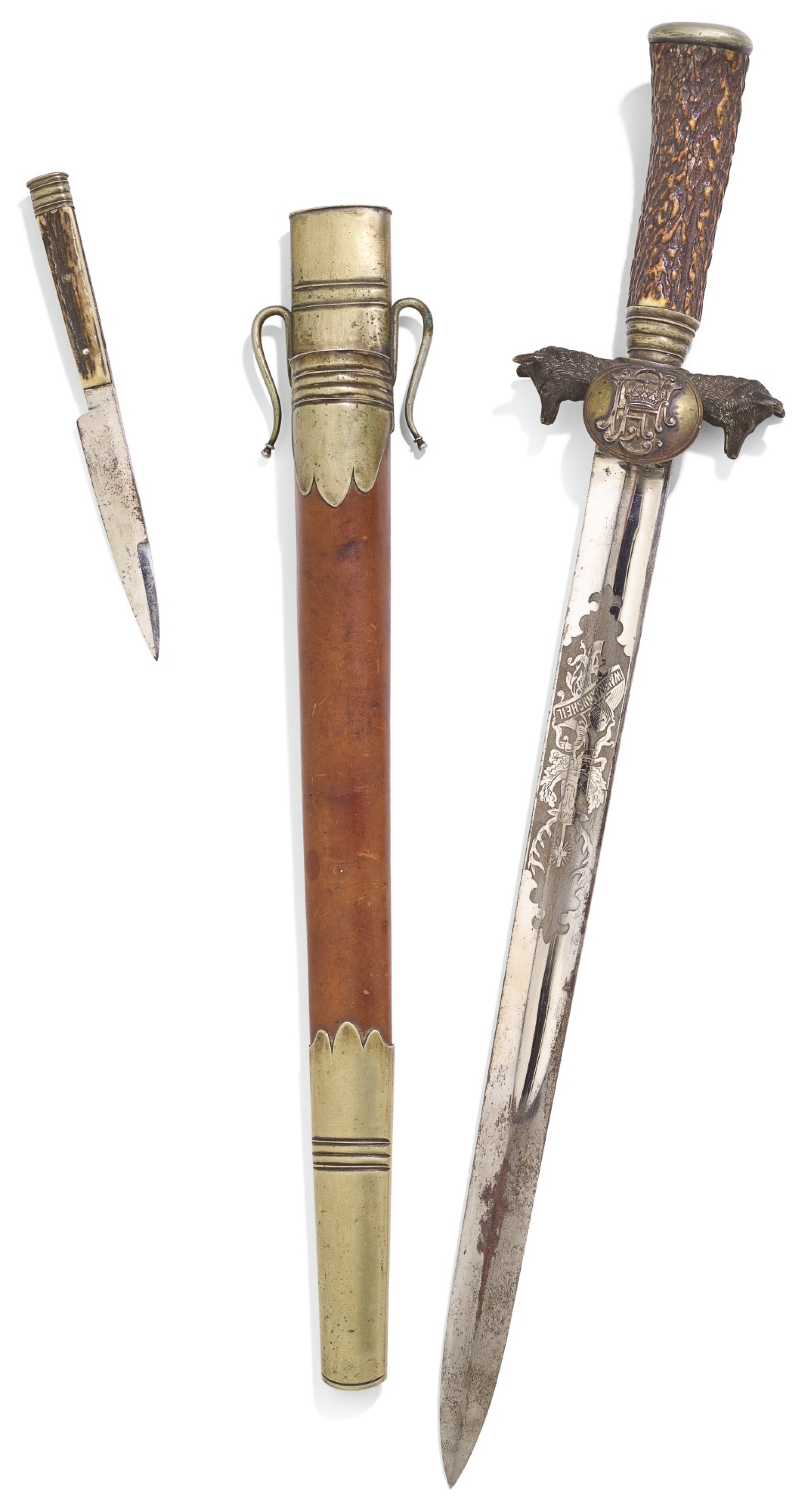 with broad blade double-edged towards the point, formed with a three-quarter length fuller, etched on one face with the stag of St Hubert and the inscription 'Waidsmann Heil', with the signature of Striberny; gilt-brass hilt cast and chased in low relief, comprising a pair of straight quillons each formed as a bear’s head in the round, down-turned shell-guard applied with silver crowned Imperial cypher, gilt-brass cap pommel and natural stag horn grip, in its brass-mounted leather-covered wooden scabbard, complete with its accompanying knife en suite and with its chamois cover

Given by the Archduke Franz Ferdinand of Austria-Este (1863-1914) to Colonel H. Wylie, the English resident in Nepal, the grandfather of the present owner.

In 1892, Archudke Franz Ferdinand of Austria-Este, heir to the Austro-Hungarian Empire, embarked on an around the world journey. Along the way he visited Suez, Yemen, Ceylon, India, Nepal, South-East Asia, Oceania, Australia, China, Japan and the United States. The purpose of this journey was a combination of a true will to explore the globe combined with medical reasons, as Franz Ferdinand suffered from tuberculosis. Furthermore, it was a phenomenal opportunity to explore his greatest passion – hunting.

He wrote a detailed diary of his travels which he published upon his return, and where he tried to impress his future subjects with his experiences, knowledge and good judgment. In the places visited, he made sure to collect local artefacts and he arrived back in Vienna with a collection of 14,000 objects and gifts which he put on show in his own museum.

The travelling party arrived in Nepal on 8th March of 1893 and stayed there until the 26th for two hunting camps in Dakna Bagh and Barbatta Valley, where Franz Ferdinand hoped to hunt tigers. In his diary of their first day, he wrote: We were received by the English resident in Nepal, Colonel H. Wylie, who was in charge of our expedition. [...] The arrangement of the hunts is organized by the [British] resident together with an uncle of the maharaja called Kesar Singh, and his son Prem Jamshir. As there was still time when we arrived at Dakna Bagh, I asked to hunt in the surroundings of the camp. The resident then immediately ordered 50 elephants prepared for a hunt (8 March 1893). Most probably to reward him for all his help during his journey, the Archduke gifted the present lot to Colonel Wylie, who served as British resident at the Court of Nepal from 1891-1899.

The Archduke also gifted an almost identical sword to Prem Shamsher Rana, nephew of the Maharaja of Lambjang and Kaski, sold at Sotheby's London, 24 February 2015, lot 75 (£27,500). On his last day in the country he wrote: “I presented the two gentlemen [The uncle and nephew of the maharaja] with my photograph and also a large gilded hunting knife, truly monstrous weapons, which caused quite a bit of pleasure for the brave gentlemen. They placed the weapons immediately on their uniforms and had their picture taken in this outfit".(26 March 1893) This photograph still exists in the collections of the Weltsmuseum in Vienna and shows clearly Prem Shamsher Rana proudly holding the received gift.