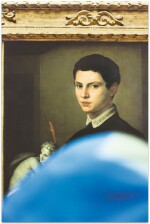 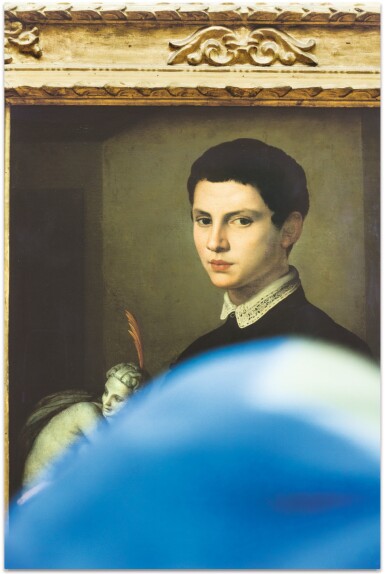 This print is in excellent condition.

In a conversation with curator Hans Ulrich Obrist, Wolfgang Tillmans explained, “It’s an emotional impulse to capture something—to represent a powerful presence as I have encountered it, but also to make a copy of it. I want to preserve it and to say, “This is true, this is important, I want there to be more of this.” This notion is perfectly represented in Bronzino, 2015, a photograph which depicts in the background Agnolo di Cosimo ("Il Bronzino") Portrait of a Man with a Statuette, c. 1545-1555, hung at The Louvre, and an unidentifiable blue shape in the foreground, possibly a hat, that obscures the lower half of the painting.

In the composition of this photograph, the cropping allows the viewer to be fully immersed in the image. “Tillmans has talked on many occasions of his desire for the experience of the viewer to be as close as possible to his own when the takes a picture”. This quality can sometimes seem to bring a snapshot quality to the work, but in reality it is far from that.

In Bronzino the image has been framed twice, thus visually elevated in the hierarchical order of the images. Along the upper margin we find the painting’s own golden frame, followed by the white minimal artist frame. This not only adds an exalted visual impact to the work but also emphasises its importance but reminding the viewer that it is worth framing twice. The central piece of the work stops being Portrait of a Man with a Statuette and becomes Tillmans’ own appropriation, Bronzino.