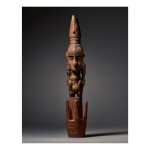 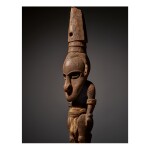 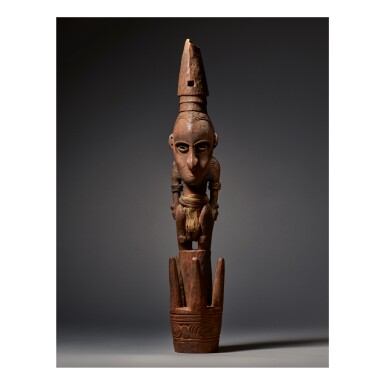 Excellent condition for an object of this type and age. Marks, nicks, scratches and abrasions consistent with age and use. Age cracks, including minor cracks to either side of the head and some open but stable cracks around the back of the hook element. Fiber attachments are dry and fragile. Minor old loss to the top point. Fine, aged, varied patina with encrustation and wear.

This suspension hook depicts a male ancestor figure whose bark-cloth loincloth identifies him as a berón kandimbong (or kandimboag). The term berón means loincloth, and its presence is one of several indications that the figure represents an initiated ancestor since, as Dirk Smidt notes, “a cloth of this sort […] was formerly worn by adult males after having undergone an initiation ceremony for the first time.” (Smidt in Kooten and van den Heuvel, eds., Sculptuur uit Afrika en Oceanië, Otterlo, 1990, p. 234). The figure’s plaited armbands, which could only be worn by initiated men, are another indication of the figure’s status. The incised patterns of scarification markings, known as taganap sigia, which appear on the chest and shoulders, are associated with initiation. They were also made upon the bodies of both men and women at other important moments in life, such as the death of a family member, “presumably as a token of alliance with the supernatural world that the dead person had just entered.” (ibid.). The powerful, staring head, which juts forward over the chest, is topped by a conical headdress. The septum is pierced, in a reference to the mythical hero Andena, whose nose was struck with a pronged fishing spear during a fight. Smidt notes that “the nostrils of the people themselves were pierced, as were the ears, and decorated as an outward sign of their identification with such mythical beings.” (ibid.). The hunched shoulders and overall posture of the present berón kandimbong suggest it may depict a prestigious old man, whose expression has lost none of its intensity or vigor. The powerful, almost brooding quality of the figure is enhanced by its strong, red ochre color, which relates to the practice of smearing the body with a mixture of red earth and coconut oil at the time of important festivities.

Each representation of an ancestor is associated with specific designs which, when taken together, create subtle and complex allusions to the particular family group or clan to which the figure belonged. In their generally naturalistic rendering of the human body these figures refer to man, whilst in their “scarification and other decorative elements to men in festive dress, and thus at the same time to the transformation from man to supernatural being […creating] a wonderful testimony of the unity of man and the ‘invisible’.” (ibid., p. 236).