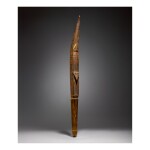 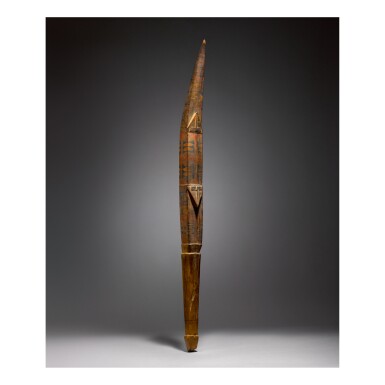 Harry A. Franklin, Beverly Hills, acquired from the above by exchange in April, 1962

According to Deborah Waite ritual dance clubs such as this, known as napa, probably come from the Santa Cruz Island of Nendö, although she notes that "the people of Utupua Island in the southernmost Santa Cruz group claim that the club originated with them." (Waite and Conru, Solomon Islands Art, Milan, 2008, p. 123). They attribute the creation of this club to a supernatural culture hero named Bamuda, who is credited with the distinctive canoe-like ends of these clubs; this resemblance is evident both in the overall form of the club and in the upturned triangular faces which appear on it, their shape recalling the everted bow and stern of a Santa Cruz canoe.

William Davenport notes that on Nendö "geometric designs were applied as surface decoration to some religious objects, such as special dance clubs (napa […]), and to the outside walls of sacred storehouses (madukna) in which religious paraphernalia were kept […]" (Davenport, Santa Cruz Island Figure Sculpture, Philadelphia, 2005, p. 2).