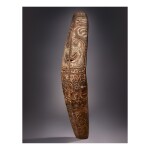 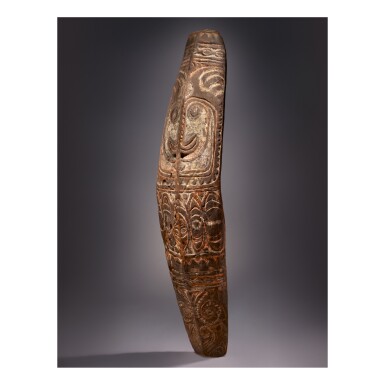 As well as offering protection in combat, war shields were emblems of power, which were often decorated, as here, with ancestral images that provided spiritual protection, transferring the power of the ancestors to the shield. The power and prestige which these objects possessed meant that shields stolen from the enemy during wars served as trophies. Peltier et al. note that this fate presumably befell a shield, similar to the present lot, which is in the Museum für Völkerkunde Dresden (inv. no. 25078); although collected in 1909 in the Lower Sepik, the style of the shield indicates that it is from the Blackwater River region (Peltier, Schindlbeck, and Kaufmann, eds., Sepik. Arts de Papouasie-Nouvelle-Guinée, Paris, 2015, p. 310, cat. no. 198).

See Friede, ed., New Guinea Art: Masterpieces from the Jolika Collection of Marcia and John Friede, San Francisco, 2005, vol. 1, p. 196, cat. no. 165 for a related shield collected in 1909 by Captain Carl Haug of the Hamburger Südsee-Expedition. Friede notes that the Jolika shield "appears to have been repainted shortly before [it] was collected." (Friede, ibid., vol. 2, p. 109). The shield from the Franklin collection shows signs of considerable age and retains the remains of old pigments; it is probably of similar age to the Jolika shield but remained in situ for considerably longer before being collected.