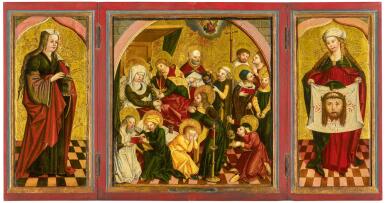 central panel: The Dormition of the Virgin;

The triptych is cradled, flat and stable. Much of the original gold ground remains intact. The paint surface is relatively clean, and the varnish slightly discoloured. Small spots of discoloured retouchings are visible scattered in the figures' flesh tones. Inspection under ultraviolet light reveals a thick, milky varnish, underneath which these are confirmed. It also reveals further sparsely scattered retouchings throughout, most notably in the central panel in the green robes of the kneeling figure lower left and the central bowing figure, as well as His halo. The painting appears to be in overall good condition.

Where possibly acquired by the father of the present owner.

The small dimensions of these panels suggest they were originally intended as a portable altar for private devotion. The emphasis on female saints – Mary Magdalene and Saint Veronica flanking the Dormition of the Virgin Mary – suggests that its original owner was a woman and possibly from a religious order dedicated to the Virgin. In the central panel the Virgin is shown upon her deathbed, surrounded by the twelve apostles. According to the Golden Legend Mary did not die but merely slept for three days before her Ascension, hence the subject usually being described as her Dormition. According to an old custom a lighted candle, symbolic of the Christian faith, is placed in her hands before her death. Saint Veronica holds the sudarium or cloth with which she wiped Christ's brow on his way to Calvary, and upon which His image was then imprinted. The supposed original is still preserved in St Peter's in Rome. Her turban is a sign of her eastern origin. Mary Magdalene holds her normal symbol of a jar of ointment and may here be a figure of repentance. The association of the two saints is unusual but not unknown. It had been used earlier, for example, by Rogier van der Weyden, in his triptych of The Crucifixion of 1445, now in the Kunsthistorisches Museum in Vienna.(1)

The attribution to Matthäus Gutrecht the Elder was first proposed by Dr. Bernt Konrad, for whose assistance in the cataloguing of this lot we are grateful. Little is known of Gutrecht, who together with his son Matthäus Gutrecht the Younger, was active around Lake Constance on the borders of Germany, Austria and Switzerland. Their best known extant collaborative work is the Holy Kinship of circa 1505, today in the Philadelphia Museum of Art (John G. Johnson Collection).(2)