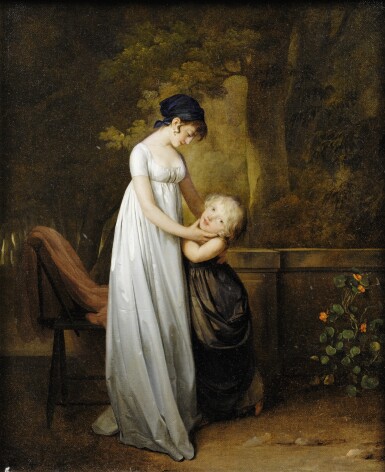 The actual painting is a bit less yellow than the catalogue illustration would suggest. The painting seems to be in a fair condition. The canvas seems to be unlined or alternatively has a very old and thin relining. A certain degree of wear may be observed in the dark brown background. The clothing and face of the main figures are nicely preserved. Under ultraviolet light, the varnish layer fluoresces in some parts, showing strengthenings of the craquelure pattern in the dark areas of the background and foreground, and in the clothes of the girl. Offered with a new plain silver-painted frame.

Seized from the above by the Einsatzstab Reichsleiter Rosenberg (ERR) and transferred to the German Embassy, Paris in August 1940;

Transferred to the Louvre in November 1940;

Transferred for restoration to the Buxheim Charterhouse, Bavaria on 14 December 1944;

Repatriated to France on 4 March 1946 and subsequently restituted to the Seligmann family on 8 May 1946;

In the mid-20th century this elegant picture belonged to the Bolivian tin mining magnate Antenor Patiño. At one time considered one of the wealthiest men in the world, Patiño maintained homes in Europe and North America, including an apartment on Fifth Avenue and another on Avenue Foch in Paris.